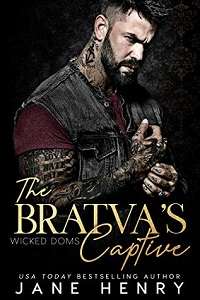 The cold, unyielding floor of the cell where I lay offers no comfort in my distress. They've covered my eyes with a blindfold, but it's no matter. They're swollen shut even without a covering. My breathing is slow and labored, and I'm confident I have broken ribs from the beatings I've taken. They like to take turns at night when they're high and drunk, tying me up and using fists and weapons. Even a trained fighter like me doesn't stand a chance against half a dozen armed men.

Yuri's oily voice makes my skin crawl when he whispers in my ear, "They keep you as their lackey, don't they?"

The sound of his voice reminds me of a time long ago when I was bitten by a snake. The way the hideously green, slithering creature glided up to me before it struck, baring its teeth.

I don't respond to his question. I learned quickly any response brings more violence. He likes to taunt me.

"The big, powerful one. Sent to spy on me. Sent to do detail."

It's taken years to master the art of detachment from physical pain, to will my mind not to fear bruises and blood, throbs and stings, but most of all, the fear of inevitable death. The key is to accept that you might die. Once you cease fearing death, pain is but an aspect of the human condition. Unpleasant but bearable. And with this knowledge, I'm able to keep my mouth closed. I'm able to withhold what he wants. I've accepted my death, so no amount of beatings will draw truth from my mouth.

I scream, the small cell echoing with the sound of my tortured yells when something strikes me across the soles of my feet. I imagine it's the truncheon feared by Russian prisoners. A Russian guard's ready weapon, the solid, stout stick supposedly only for self-defense, is used far more frequently than one might think.

They don't stop there, mercilessly beating me about the thighs and body, demanding information I won't give. I'm panting, but I can't move with restraints on my wrists and ankles. It's dark. So dark, I feel I'm being pulled down into quicksand the color of pitch. The walls close in around me and I find it difficult to breathe.

They stripped me and dragged me to this cell, but not before I broke the nose of one and knocked a second out before they overpowered me. And now they punish me for raising my hands to them. For my failure to speak. Because I represent their most loathed rivals.

I writhe, sweat breaking out over my body. Unable to stop the pain. Waiting for the blow to my head that will kill me.

My only regret is that I didn't get a chance to say good-bye to Taya. My Taya.

The questions come hard and fast, but I don't respond.

Tell me how you made alliances with Amaranov.

What have you done with Sergie?

What do you know about the funds from Sarajevo?

From money laundering to kidnapping, they seem to think our brotherhood is responsible for everything illegal that's happened in Russia in the past decade.

Some things I know for sure we are guilty of. We intentionally plotted to overtake the illicit fund transfers orchestrated by former prime minister Amaranov and did so by making him an offer that countered theirs. But rival Bratva bids aren't licit deals and their only claim on us is revenge. Still, they are dissatisfied we've essentially stolen from them.

I don't know the details about Sergie, but I do know his blood was on the hands of Dimitri, our former pakhan. Sometimes, not knowing details proves useful. I knew Sergie did something that personally offended Dimitri. I knew Dimitri didn't take kindly to offense. And though he never told us what he did, it became clear The Thieves suspected we were the ones responsible for his going missing. I wasn't, but my brotherhood was, and now I bear the consequences.

Any of us would. It's one of the major tenets of the brotherhood: we stand as one.

I know nothing about Sarajevo.

And even if I did, they would extract nothing from me.

I wouldn't even tell them my name.

While they abuse me, inflicting pain the likes of which I've never known, I force my mind to escape to a place of quiet.

The little cabin in Istra, bordered by violet crocuses, the first flowers of early spring. The smell of orchids by the creek when I fish, amidst the quiet and calm running water.

The soft hands and gentle touch that come to me when I'm bound, bruised, and barely conscious. So quiet, so gentle, I'm convinced it's my imagination. An angel come to minister to me in my distress.

The smell of roses.

I am not here.

This is my body, being beaten and abused, but my body is only a part of who I am.