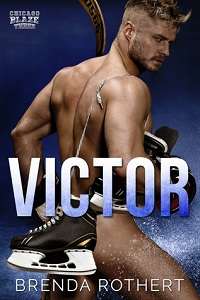 I groan softly as I peer inside the old washing machine in the basement of the Carson Center. The cleaning rags I planned to put in the dryer are floating in a giant tub full of water. This place is home to the best pro hockey team in the world, but the brass won’t spring for a decent washing machine.

And today, that’s a big problem, because with the ICEE machine on the fritz, we’re going to have a lot of messes. Submitting a work order to have equipment fixed around here is a thing, and in the meantime, we concession stand workers are stuck using cheap napkins to clean everything.

My dad’s a plumber, and I’ve learned a few things from him over the years. If the issue is a quick fix, I might be able to handle it.

It takes me a little while to remove the front panel from the washer. I have to bend down and remove the screws from the bottom corners in front of the washer and pull the panel down and out towards me. I set it aside and get down on the floor to, as my dad would say, assess the situation. The floor is dirty, but I’m off in less than an hour, so it doesn’t really matter.

“Aha,” I say to myself as I find the problem.

The drain hose isn’t fully connected to the drainpipe. As I spend the next few minutes reconnecting the hose to the pipe, the hose material leaves a chalky film on my hands. After I’m done, I replace the washing machine panel, wash my hands in the ancient mop sink in the corner of the basement storage room, then wring out each cleaning cloth and toss them into the dryer.

Once done, I set the washer to a quick rinse cycle to drain the water from the tub and then head back to the service elevator.

The Carson Center is massive, and things have been moved around since it was built thirty years ago. Once I get off the elevator, it’s a hike from the storage room back to the main concession area.

There’s a staff meeting going on in the employee break room, and I plan to sneak in unnoticed. But as soon as I walk in, my boss Bruce gives me a disapproving frown.

I hate—actually, it’s more like loathe—the way Bruce calls all the employees by our last names, like we’re in the military or something. Because in my case, there are inevitably snickers about my last name, which is an unfortunate one for a woman who is, in every way, ordinary.

“Sorry,” I say, my cheeks warming from the stares of my coworkers.

“How long have you worked here, Boring?” Bruce crosses his arms only to rest them on his ample belly.

I glance at the wall clock. I’m not even four minutes late, and he’s going to make it an issue. Sighing inwardly, I say, “Three years.”

“And for three years, what time have I held our weekly staff meeting?”

Arching his brows, he nods, his expression loaded with condescension. And just when I think he’s had enough of showing us all who’s boss, he keeps going.

“Were you on a smoke break?”

My friend Ariana sighs audibly, drawing a sharp look from Bruce. I clear my throat, eager to defuse the situation before Ariana says something that will get her written up.

“I was fixing the washing machine,” I say quickly. “And wringing out the cleaning rags so we’ll have some tonight since the ICEE machine is broken.”

Bruce’s eyes widen and his lips part. His expression is nothing short of amused.

“Fixing the washing machine? Who authorized you to do that?”

I freeze, wishing I was quick and clever like Ari. “Um…”

I’m twenty-three, but I don’t dare correct him.

“She knows more than the rest of us,” Ari says defensively. “Her dad’s a plumber.”

Bruce ignores her, keeping his glare focused on me. His frown is so pronounced that it disappears beneath his bushy brown mustache.

“We call them cleaning towels, not rags, Boring,” he says. “And the ICEE machine is fixed.”

“No, it’s not,” Ari says, shaking her head. Several of my coworkers murmur their agreement.

Bruce turns to face Ari and I let out a small exhale of relief.

“I closed out that work order, Gonzales,” he says to her. “It’s fixed.”

“No, it still doesn’t stop when it’s supposed to.”

Bruce points at the name tag on his chest. “You see the word ‘manager’ right here, Gonzales? It means the repair and replacement of equipment around here is my job, not yours. You just stick to making the ICEEs.”

Ari opens her mouth just as I meet her eyes from across the room. She’s got a young son to support; she needs this job. And she’s the best friend I have here. Or anywhere, really. I don’t want her getting fired over Bruce’s fragile ego.