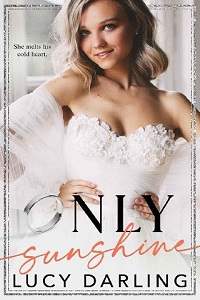 My favorite sound once upon a time. The place I’ve been renting for the past week is filled with it. Now the very thing I loved in the past is haunting me. My mind longs for a different sound. A fucking giggle. What the hell is wrong with me? I’ve been asking myself that for a week.

I’ve even toyed with the idea of seeking psychological help. I’m clearly not myself, but I toss that idea right out. Truth is, I don’t want to fix what’s wrong with me. That would mean no more sunshine. That my days would go back to being the same as they were before her. I can’t have that. I could never go back.

As I do every morning, I reach for my phone on the nightstand, sit up, and throw my legs over the side of the bed.

Instead of going into my emails as I do every other morning, I click on Marco’s name. A man I barely know but who knows a hell of a lot about me. At least in an area I don’t want him to.

An acquaintance of mine, Vincent, suggested him to me when I told him I might need security and possibly a private investigator while I was in town. His head of security told him to get Marco. That he was the best in the business. That’s all the information I’d gotten about him.

A first name and a fucking number. For all I know, it could actually be his last name. While I might have been annoyed at the time, the man has proven to be efficient in his tasks. I often think some of the things he does may not always be on the legal side to get what I want, but then I don’t ask. As long as I get the information I’m seeking, I really don’t care how he comes by it. A week ago, I would have had a problem with that. Now my morals have started to shift.

Marco: Went to bed at 2am after spending three hours on her laptop. Want to know what she was doing? Strange search history this one.

Marco enjoys poking me. It’s not something I’m used to, but he knows I need him more than he likely needs me. Especially for how expensive the man is. I’m sure he’s got a long list of other people he could be stalking.

Who knew such a thing could pay so well? It had never been one of the trading options on the markets. I suppose that could fall under Lock Martin or Howmet Technologies. They do defense stocks. At least that’s what they refer to themselves as doing. While it was lucrative, my moral scale didn’t tip that far. Or so I’d thought. But she changed that all for me.

Marco: She keeps notes of everything. It’s strange.

I grip the phone tighter in my hand. She’s not strange. Quirky, sure, but that only adds to her whole appeal. Somehow the freckles that are sprinkled across the bridge of her nose do as well. I don’t know why. All together, it adds up somehow in my mind.

He and I both know I don’t want him to actually stop. I want every bit of information about her. There is not a single detail I want left out. But in some weird way, I hate that he knows these things about her.

Marco: She’s tucked away in her apartment. I’ll let you know when she moves.

I drop my phone back down on the nightstand to rub my temples. It’s six in the morning. She should still be in bed. The girl works too damn much.

That’s laughable coming from me. I should be checking my emails, not stalking a girl who doesn’t even reside in the same city as I do. I shouldn’t be here. I have a twenty-million-dollar deal on ice right now with the Stone Brothers because I left the city to travel here. All because I heard the sound of one sweet, scared little voice. That’s all it took for me to leave.

It came out of nowhere. I was enjoying my quiet, as I always do. The quiet is always so telling. You can get people to say so much when you say so little. I’d learned that from my father because he could never shut the fuck up to save his life. We’d been cut from two very different cloths. So I thought. Obviously, the apple doesn’t fall from the tree in this instance.

My old man had made irrational decisions. I promised myself that I’d never be that way. I’ve worked hard to maintain that. Until her. For the first time in my life, I'm the one that is acting irrational and all because of a voice.

One that should have annoyed me. And would have if it came from anyone else. Instead, it lured me in like a lighthouse clearing the fog from my mind I hadn’t known was there until her bright light was shining in my face. Now I can’t look away, and I only keep drifting closer.