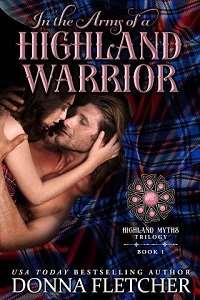 Tavia stood in the silence of the forest. She should not be there, but she hadn’t been able to resist. She had come here often when she was young. It was her escape, a place to dream, imagine, hope. Her da would scold her, warning her that the forest held beauty, but it also held danger, and she should not venture in it alone. Still, though, he had never stopped her… until the accident.

A sudden sound had her turning and she smiled seeing that a large pine tree had shed some of the snow that had weighed heavily on its branches. The towering tree appeared pleased with itself, its spreading branches no longer drooping, now proudly lifted, finally free of its burden.

If only one could shed problems so easily.

The last few days had been more sun than clouds melting a good portion of the snow that had fallen in intervals for the last week. Not that it was the last of the winter snow, there would be more, but she would not be here to see it.

The sad thought caused her heart to turn heavy and she focused on her surroundings committing the forest she had come to know and love to memory. She went to take a step to walk a bit farther into the woods and a sudden pain struck her leg, causing her to stumble. She could not prevent herself from falling, though she wisely twisted her body so she would land in a snowdrift.

Tavia laughed and sat up, brushing off the snow that had fallen on her. It reminded her of when she was young and would jump or fall, in play, into the snowdrifts. A pain turned her laughter to a wince, stealing the happy memory and reminding her of her limitations. The accident had left her with a limp and the snow and cold made it all that more difficult. She would suffer for her trek into the forest. Her limp would be more pronounced and her leg painful for a day or two. At the moment, she did not care. It was more important that she had this time here and felt as free and carefree as she had—what seemed like not that long ago.

She got herself to her feet with some difficultly and realized the walk back to the keep would be painful, but worth it for this brief taste of freedom. In a few days, it would all be gone.

After a shake of her cloak to rid it of the remaining snow, she took a cautious step and grimaced from the pain that rippled through her leg. The walk back was going to be more difficult than she thought. She would need to take her time, keep her pace slow. It did not help that a chill crept through her, the air having gotten a sudden bite to it and the sun having ducked behind a cloud.

Worry began to take hold, not about her painful return to the keep, she could manage that. Once at the keep, she would rest her leg and apply a warm cloth that would ease her suffering. What worried her more and had since she had first learned of what the future held for her was… what would her new husband think of her limp and the problems that came with it?

Tavia had had little decision in the matter, the marriage arrangement necessary to her clan. Her da had been upset but adamant about the marriage when he had told her about it. Clan Strathearn would not survive if the marriage did not take place. It was her duty to help the clan.

It had only been her and her da, her mum having died giving birth to her and her da never finding another woman he loved as much as he loved Tavia’s mum. He’d been a wonderful, loving da, which had made it easier for her to be a loving, obedient daughter. Now she was expected to be a caring, obedient wife to a man she had never met. And a man more Northman than Highlander. But with his clan bordering a small section of her clan to the north, he could provide protection. It also brought much needed help in many different ways to her clan, sufficient food being one of them. With the clan dwindling, it was difficult to provide the necessities. Her new husband, Lord Bhric, intended to infuse the clan with his own people, populating it more and growing it strong once again.

Tavia could not deny her clan such an opportunity, even if it cost her dearly.

She made slow progress through the forest, not something she minded. She cherished this time alone. It had been hectic the last week or more with Lord Cree and Lady Dawn here to help solve a problem plaguing the clan. But it had been settled. At least she hoped it had. There was still concern for the woman, Fia, in the dungeon, but a claim had been made on her and her da was considering it. She had no idea what her husband would have to say about it, or if he would leave it to her da to decide.