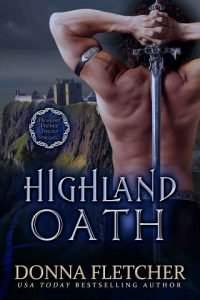 “Do you love Oria?’ Raven asked her brother Royden.

“It doesn’t matter if he does or doesn’t. A marriage agreement has been signed and it’s his duty to marry her.” Arran grinned and jabbed his brother in the arm. “Lucky for him that he’s pined for Oria for years.”

“She does seem to favor Royden,” Raven said, playfully wrinkling her nose in distaste.

“You’re astute for only ten and four years, little sister,” Arran said with a wink at her.

“Soon-to-be ten and five years,” Raven boasted, her birthday not far off.

Royden’s dark eyes fixed on his sister. “More like noisy and bothersome. She thinks I don’t see her lurking nearby when Oria visits with me.”

Raven wrinkled her nose again. “At least I haven’t told anyone that you’ve kissed her.”

“You shouldn’t be seeing that,” Arran scolded with a smile.

“How else am I going to know how to kiss?” Raven argued.

“You’ll not be kissing anyone but your husband and he will teach you what you need to know,” Royden warned like a parent reprimanding a child.

“What if I don’t like the man Da chooses for me?” Raven asked, not that she had to worry about that at the moment. She hadn’t started her monthly bleeding yet and Bethany, the cook and the woman who had been more like a mum to her since she’d been born—her mum having died in childbirth—had told her that she wasn’t a woman until she got her monthly bleeding.

“I’d be more concerned about finding a man who would agree to marry you,” Arran said with a laugh.

Raven punched him in the arm, not that it hurt her brother Arran. His arms were too lean with hard muscles, earned from spending so much time on the practice field.

“No need to worry about that, Raven. Da will not see you wed to a man you dislike,” Royden said. “He wants you to be happy and safe.”

“I’m happy and safe here with Da and both of you, and here is where I prefer to stay,” Raven said with a stubborn raise of her chin.

“A husband won’t tolerate a stubborn wife or the raised chin that goes with it,” Arran cautioned.

“And how will Da ever find you a wife when your eyes are forever roving over every woman that passes by you?” Raven asked with a smile that dripped with false sweetness.

Both brothers sat straight up in their chairs at the dais in the Great Hall and glared at Raven.

“And what have you seen lurking around Arran?” Royden demanded.

“Enough about kissing to make me sick, and a few other things I would never want done to me,” Raven said and pretended to gag.

“Da needs to keep a firmer hand on you,” Arran snapped.

“Both of you need to keep a better eye on your sister, since she can trail after you both without being noticed,” Parlan MacKinnon said, shaking his head. “If you were a son, I’d say good work, but since you’re my daughter, you won’t be doing that again. Understand, Raven?”

“Aye, Da,” she said with another false, sweet smile.

“I’ll have your word on that, daughter,” Parlan ordered.

Raven responded reluctantly. “You have my word.”

“Good. Now take yourself off to bed. I have things to discuss with you brothers,” Parlan said, his command leaving no room for her to argue.

Raven hurried to her da and gave him a hug and kiss on the cheek, something she did every night. She loved when his strong arms wrapped around her and squeezed her tight. It was like he was squeezing all his love into her.

“See you on the morrow,” she called out to her brothers and rushed off, though as soon as she reached the shadows she stopped and let them swallow her up. She hated when she was dismissed, left out of important clan matters because she was a lass. She had a good mind and hoped to grow it wiser and how was she to do that if she wasn’t included in clan discussions?

It was her da and brothers’ fault that she had to sneak about. It was the only way for her to learn things. Like now, she watched her brothers follow her da out of the Great Hall. She knew where they were going and she waited, fighting her impatience, until their footfalls faded, then followed after them.

Raven crept silently along the sturdy stone walls, clinging to the shadows as she made her way to her da’s solar. When she arrived at the closed door, she tucked herself into the darkest shadow and kept herself as still as she could.

She didn’t have to strain to hear them talk, all three had strong, commanding voices, from her da who was Chieftain of the Clan MacKinnon and a man whose age, four ten and six years, had yet to define him. His hair showed not a strand of gray and his body remained firm with muscle. Wrinkles and lines didn’t distract from his fine features and many a woman in the clan vied for his attention, but he claimed he could never love another as he had loved his wife, Margaret.