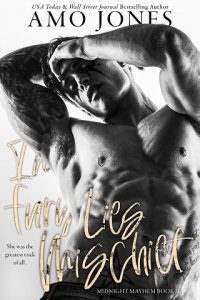 “Welcome to Midnight Mayem. We are not a circus, we are not a carnival, and the only thing that you should be afraid of losing tonight, is your sanity…”

When I was ten years old, I told the world to go fuck themselves. I mean, I literally stood up in the center of the ring, made Ky hook up a video, flipped the camera the bird, and told every motherfucker while holding my junk, “Fuck you!” Now, I know what you’re thinking. How the fuck could you do this at the tender age of ten?

Well, I’ll tell you how. Ky is abnormally smart. I mean, textbooks couldn’t even figure out his shit—smart. We made the video, and then Ky hacked into some survey and uploaded the video.

Spread through all news channels.

Across every single thing that was televising live during that very minute.

How’d I reach this point, you ask, well, a funny story… I mean, I could go back and tell you from the day I entered this world, but let’s be honest, no one, aside from my sex crazed best friends who like fucking her, wants a descriptive image of my mother’s vagina, so whatever. Long story that doesn’t have anything of importance short, I’m hard-wired to be this way. I was born human but crafted to be this.

The fucking Mayhem in Midnight. The motherfucker that would push all of your boundaries and make you feel good while doing it.

Speaking of Midnight Mayhem: Our family. Our unit. A bunch of fucked Romanians that are living the good life in America. I mean, shit, to be fair, we’ve all been living here since our parents moved over when we were young. Never found out why. Never asked.

“What are you doing?” King glares at me from across the booth.

I wave my hand up, grinning. “Listening to music. That cool with you?”

It was Christmas only a few weeks ago, and we all had a long enough break. Now we’re kicking off our new year with our first international show in Australia. Delila always has her reasons, whether we see them or not. It can be frustrating when she starts being cryptic, which is exactly what she has been lately.

I lean forward, lowering my voice so P doesn’t wake, but her mouth falls open slightly and a snore escapes. I smirk.

My eyes fly up to King. “Fine, moody bastard. I was just going to—”

“—Killian, get to what you were going to ask me and leave her alone. She’s probably still tired as fuck from New Year’s Eve, which by the way… are we going to talk about that?” King’s attention shifts over my shoulder. I don’t have to look to know who he’s talking about.

My smile drops. “No. We don’t. As I was about to say before your sweet little angel distracted me with her snoring, have you asked Delila why we’re doing an international tour this year?”

We do international shows, but we do them every five years because of the time and cost that comes into it. We take on more staff and are away for fourteen months each time. Since the last one we did was two years ago, the fact that we’re already all abroad doesn’t sit right with me. The floor rocks softly, the imbalance a dead giveaway that we’re on The Cap aka—my family’s huge ass fucking cruise ship. We always take the ship over to kick off an international flight to give us time to practice, train, wind down a bit. If we take the 747, we all end up grumpy, tired, and only needing to train as soon as we get on land anyway. This way, we can take the majority of our equipment over with us. The Cap, named after my great, great something grandfather, is painted in sleek black with the words Midnight Mayhem written over the sides in lilac. It can be a bitch when it comes to customs and transfers for the road registration, but that’s where connections come in and a lot of powerful people owe us a shit ton of favors.

King shakes his head, picking up his glass of whiskey and throwing it back. “No. She’s more on edge than ever.” We’re currently kicking back in Yaam. The bar located on level one. Obviously, this isn’t like your usual cruise ship. There are no souvenir shops or cute little bakeries. There are two bars, one on this level and the other on the top deck near the pool. On the second level is where all of our bedrooms and storage compartments for the lighter loads are, where the heavier items—such as bikes, equipment, and all the others are tucked inside the basement.

“Yeah.” I run my hand through the strands of my hair, tugging on the ends slightly. “I’ve noticed that too.” Since Christmas Day, Delila has been more reserved and tense. None of us have seen this shift in her before, and it has put a spin on the dynamic that we live through. Delila is the type of woman that brings funerals to life, not sleep with the dead.