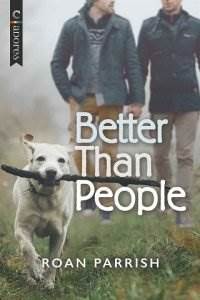 If you had told Jack Matheson when he woke up this morning that he’d end the day at the bottom of a ditch, he wouldn’t have been terribly surprised. After all, his whole life felt like it was spent at the bottoms of ditches these days—what was one more literal one?

The nightly walk had begun as they usually did. As soon as he finished dinner and placed his plate and fork in the sink, the dogs had clustered around him, eyes hopeful and tongues out, ready to prowl. Bernard butted his huge head against Jack’s thighs in encouragement while Puddles hung back, waiting to follow the group out. Dandelion pawed at the ground excitedly, and Rat vibrated in place, tiny body taut with anticipation.

The cats cleaned themselves or snoozed on various surfaces, watching with disinterest, except for Pirate. Pirate twined her way through the forest of legs and paws and tails, back arched, sleek and ready.

“Let’s head out,” Jack said, clipping on leashes and straightening harnesses as he shoved his feet into worn boots and plastic bags in his back pocket.

Pirate led the way, trotting light-footed ahead of them, then doubling back like a scout. Huge, snuggly Bernard—a St. Bernard who’d been with him the longest—took turns walking next to each of the others, nipping and licking at his friends enthusiastically, and drawing back when he accidentally shoved them off their feet. Bernard didn’t know his own strength.

Dandelion pranced along, happy as always to snap at the breeze or a puff of dust, or simply to be outside.

Puddles walked carefully, his soft golden face swinging back and forth, alert for danger, and he jumped at every sound. Twice, Jack had to scoop him up and carry him over the puddles he refused to step in or walk around.

Rat took the lead, just behind Pirate, her tiny legs going hummingbird fast to keep ahead of the others. She kept her nose to the ground, and if she scented a threat, she’d be the first to take it on.

Their leashes crisscrossed throughout the walk, and Jack untangled them absently as he kept one eye on the animals and the other on the sky.

Summer had settled into autumn, and the leaves of Garnet Run, Wyoming, were tipped with red and gold. The air held the first promises of winter, and Jack found himself sighing deeply. Winter was beautiful here. His little cottage was cozy, his fireplace warm, and the woods peaceful.

But this year, for the first time in nearly a decade, he wouldn’t have work to occupy him as the snow fell outside.

Jack growled and clenched his fists against the fury that roared in his ears as he anticipated yet another night without a notebook in his hand.

Bernard snuffled against his thigh and Puddles whined. This—this right here was why animals beat people, paws down.

They were sensitive. They cared. They wanted to be loved and they gave love back. Animals never betrayed you the way people did. They were loyal.

“I’ll be okay,” Jack repeated firmly, to himself this time, as a squirrel’s over-enthusiastic labors dislodged an acorn from an overhanging branch. The acorn rustled through the leaves and fell directly onto the soft fur between Puddles’ ears, where Jack’s fingers had stroked a moment before.

Puddles, skittish at the best of times, reared into the air, fur bristling, and took off into the trees, his leash slipping through Jack’s fingers.

Jack tried to follow, but Bernard had plopped down on the soft grass at the tree line and was currently rolling himself in evening smells. It was useless to attempt to move Bernard once he was on the ground, even for a man of Jack’s size.

“Stay!” Jack commanded. Bernard woofed, Dandelion flopped down beside him, Rat clawed at the ground, teeth bared. “Pirate, watch them,” he called to the cat, even though Pirate had never given him any indication that she understood orders, much less took them.

Jack took off after Puddles. The thought of the dog afraid made Jack’s heart pound and he ran full-out.

Puddles had been a trembling mess when Jack found him by the side of the road two years before, and it had taken a month before the Lab would even eat the food Jack offered from his hand. Slowly, painstakingly, he had gained Puddles’ trust, and the dog had joined the rest of his pack.

“Puddles!” Jack called into the twilight. He heard a whine ahead and sped up, muscles burning, glad for his afternoon runs. Leaves crunched up ahead to his left and Jack zagged. “Puddles?”

Dark was closing in on the woods and Jack narrowed his eyes, hoping to avoid running smack into a tree. When he heard Puddles’ soft bark from up ahead he threw himself forward again.