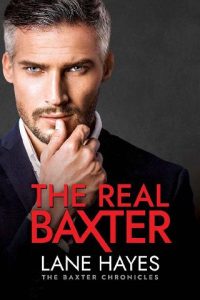 “One man’s ways may be as good as another’s, but we all like our own best.” —Jane Austen, Persuasion

“Quiet on the set. Cameras rolling in three, two, one…action!”

Fog billowed across the warehouse floor and seeped through broken windows, shrouding the thick evening air in a suffocating veil. Baxter flattened his back against the wall, gun cocked as he listened for Cutchall’s thug to give himself away. He didn’t have to wait for long. A soft click sounded from the rafters above, followed by a muffled curse.

Baxter melted deeper into the shadows, smoothing his gloved hand over the lapels on his pinstripe charcoal suit. He was as cool and composed as he looked. This was a routine bust, and the perp was obviously an amateur. Any second now, he’d do something stupid.

“Where are you, Baxter?”

Baxter rolled his eyes on cue and slinked sideways, prepared to pounce—just as a figure dressed entirely in black jumped onto the platform. He was tall and thick with dark hair…and he was now a mere five feet away.

Baxter willed the thug to move toward the wall. And he did.

One step, two steps…there he was. So close Baxter could smell the acrid mix of booze, sweat, and fear as he lunged forward, delivered an elbow, kicked the man in the ribs, and knocked him flat on his ass.

No, wait. The guy fell. He either tripped over a prop or his own feet, flopping in an inglorious heap on the cement floor.

Geez, that had to hurt, I mused, rubbing my beard thoughtfully as the director yelled, “Cut!”

“Sorry about that,” the stuntman rasped in a low, sexy timbre, brushing his hands as he stood.

“Sorry?” The director growled, yanking his headphones off irritably. “We’ve done this scene five times already. There is no falling in this scene. No one falls. I need yet another fucking retake, gang. And…I need a new double, stat. Get that guy outta here. He’s fired.”

“You run a tight ship, Hal,” I snarked, patting the older man’s shoulder as he hefted himself from his chair with a beleaguered sigh.

“Perfect timing as usual, Seb. Did you need something?”

I pasted a friendly smile on my face. “Just popped in to see how things are going.”

“Just fucking peachy,” Hal huffed, swinging his arm toward the sound stage. “As you can see from that stellar performance.”

“Thanks, Hal,” Pierce chimed sarcastically, elbowing a cameraperson in his haste to join us. He gave the director a short nod before turning to me. “How are ya, Seb?”

“Good. Thanks.” I shook the younger man’s hand, reminding myself for the zillionth time not to call him a kiss-ass out loud.

Pierce Allen played Baxter and did a damn fine job of it, but in real life…he was a self-absorbed actor who balanced his god complex with an endearing goofy side that appealed to the masses. Whatever. The important point was that he looked and acted his part convincingly onscreen. After starring in five feature films as the crime-fighting, mystery-solving, modern-day hero, Pierce had ingratiated himself to the franchise.

Of course, I was the real Baxter, but Pierce was a passable stand-in.

He was six three with dark hair, a light beard, blue eyes, and a lean muscular build. He was also fifteen years younger than me and loved the limelight. Not important to me. As long as Pierce kept his nose clean and stayed out of the papers, I wasn’t interested in him outside of the studio. Obviously, I couldn’t say that; I needed the guy who played my internal alter-ego onscreen to think I liked him.

Which, once upon a time…I was embarrassed to admit, I’d done a little too well. My PR department referred to that incident as “The Pierce Story.” It was a one-time fling we both agreed would never happen again. However, we weren’t above letting the public think we were maybe possibly romantically attached for the sake of positive press.

As executive producer, managing public relations came with the territory. The other half of my job involved being a cheerleader for oversensitive actors, persnickety directors, and the crew members said actors and directors tortured with their unstable mood swings. Over the past couple of decades, I’d become the world’s best bullshitter…if I did say so myself.

I peeked at my watch when it vibrated with an incoming message from my secretary, then inclined my head as though I gave a fuck while Pierce yammered on about his car collection and an insane idea he had about Baxter driving a Porsche through a fire, off a cliff, and somehow landing on the 405 completely intact.

“Yeah, that’s not happening,” Hal grumbled, cutting Pierce off midsentence. “We’re retaking this scene in ten minutes. Why don’t you grab yourself a cup of joe while we find a new stuntman?”

I smiled when Pierce held his hand up for a high five. “Later, Pierce.”