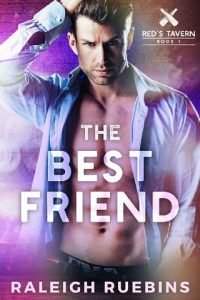 Woke up hard as diamond again, thinking about Mitch. The weird thing about best friends is you still dream of them, even if it’s been fifteen years since they up and moved their ass to Chicago.

The bottom of my empty pint glass hit the top of the wooden bar with a thud. I swallowed the last gulp of citrusy lager, already wishing I had more.

“So… you said you’re a math teacher?” the guy next to me was saying. He was trying hard to be polite. I’d started talking to him earlier in hopes that I could score a hookup for the night, but it was becoming more and more obvious that I was crashing and burning.

I nodded. “I teach math to Amberfield’s finest high school students. And you’re a… contractor?”

The beer churned in my stomach. I couldn’t even flirt right tonight. And of course I knew why I was falling flat on my ass with every guy I tried to pick up.

My best friend who had moved back to town this week, after being gone for so damn long, and who decided he was moving back without telling me.

Mitchell knew I hated surprises. Fucking asshole. I loved him so much. And I was going to get to see him tomorrow for the first time in way too long.

“So, hair stylist,” I said to the guy next to me, who was poking at the maraschino cherry in his cocktail. “Is it fun?”

He sighed, swiveling to face me on his barstool. “Let’s cut the crap, okay? Obviously you don’t give a shit about what I do for a living.”

“I know I’m not the first guy you’ve tried to snag tonight.”

I sat up straighter, clutching my pint glass. “Okay. You’re not wrong. But I’m interested in what you do.”

He rolled his eyes. “Honestly, I don’t care. I didn’t come here to talk about cutting hair, I came here to suck someone’s dick.”

“A man who knows what he wants,” I said, still stunned that he was being so direct.

“You’re cute enough. Come with me to the bathroom.”

I definitely hadn’t been expecting that out of him.

He lifted one eyebrow. “Yeah. Really.” He started to get up out of his chair, giving me a look that said hurry the fuck up and put your cock in my mouth.

Normally my dick would have perked up instantly. This was what I’d been trying to find: a guy who wanted me, no strings attached. But I felt nothing. Nada. Not even so much as a courtesy boner. It was like my dick had gone on strike for anyone other than Mitchell.

Which was bad, because my best friend wanted nothing to do with my penis.

The guy next to me sighed, gathering his jacket from the back of the chair. “Not gonna happen. Okay.”

The guy laughed and put on his jacket. “Oh, honey, then I’m the one who’s sorry,” he said. He leaned in, giving me a light hug, complete with a pat on the back. “You’ll be okay. But believe me, nobody ever converts a straight guy.”

“I’m not trying to convert him—”

He was already walking off, giving me a peace sign as he pushed through the big wooden front doors of the tavern. I turned away, forcing myself to focus my eyes on the racks of liquor behind the bar. Rainbow-colored tinsel hung behind all of the bottles, shimmering in the light.

Red’s Tavern was the only bar I ever bothered coming to. Hot, single gay men came here, and even if there weren’t that many gay men in Amberfield, Red’s was always my best bet. There were great tunes and sometimes even live music. The beer was fantastic, and Perry’s food was simple home cooking, but stupidly delicious.

But today it felt like the usual magic of the tavern was lost on me.

Red was the only bartender on duty right now, and he was giving me a look somewhere between pity and sympathy. He had witnessed me fail like this three times tonight, and bless his heart, he hadn’t started making fun of me yet.

There was the beginning of a smile playing across Red’s lips, complete with unmistakable pity and misguided affection.

“You know tequila shots are half off, right? Not that I think there’s any reason you might want to completely forget what’s been happening tonight, or anything...”

His tone was the same gentle but firm tone I used when I had to tell one of my students that they got an F on a math test. Red felt sorry for me, clearly.