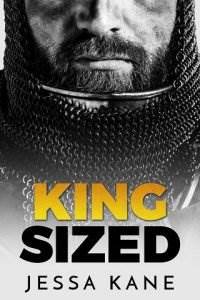 I wasn’t raised to stand by silently while a girl cries.

Growing up, I was the oldest of six children—and the only boy. Do that arithmetic. It means I had five younger sisters and they did all manner of wailing. All the bleeding time. It led to a lot of experimentation on my part, trying to figure out the secret formula to make them stop. After thirty years of being a big brother, I finally discovered the answer.

The answer is: there is no answer.

Sometimes they just want to carry on until they’ve emptied the well of tears and a man just has to sit there and nod until it’s over. Occasionally, sugar or alcohol helps, but that’s a gamble. If you give them something nice, it can make the crying even harder and then you are up shit creek, my friend. Best bet is to sit silently and nod in understanding. And—this is key—if they’re crying about a man, every man is to blame. That means me. All men are bastards.

God knows I feel like one right now, standing guard outside the princess’s bedchambers while she weeps brokenly for all the Kingdom of Downsriver to hear.

It’s a black day for our homeland.

The king and queen were murdered today. By thieves. On the road back from a diplomatic meeting in the neighboring kingdom of Northstream.

Come to think of it, that makes Princess Britta…the new queen.

And here we are, the fourteen men of the princess’s guard, standing around like a bunch of fucking lumps on a carrot while Britta cries her heart out on the other side of the door. As we’ve been trained, all of us stare straight ahead, like we’re the victims of taxidermy.

As usual, I’m the first to break character. I’ve never understood the reason we can’t move or speak while guarding the royals. As if showing any signs of life makes us less effective.

“Honestly, though,” I say, dropping my rigid posture. “No one is going in there?”

Hamish, the bloke standing next to me, jolts like I’ve just shocked him with an electrified pitchfork. “What are you doing?” he whispers furiously out of the side of his mouth. “Quiet, now. Stand up straight. We’re on duty.”

“We’re a useless pack of idiots holding up the hallway walls.” Britta lets out a particularly pitiful sob and I feel it down to my toes. This is torture. “One of us needs to do something.”

“We’re paid to stand here,” Hamish points out, as if the purpose for which I’ve been hired never occurred to me. “To guard against harm.”

These guys take themselves way too seriously. It’s one of the reasons they’re so easy to rile up. “What if the girl cries herself to death? Have you thought of that?”

Some of the men seem nervous now.

“Well I, for one, am not going in there,” one of them says in a shaky whisper. “I tried to comfort a crying girl once and she poked me in the eye.”

“Oh now, how did you survive?” I deadpan, appealing to the rest of the group with a raised eyebrow. “Is that it, then? You’re all scared of a crying girl?”

“They get so nasty,” Hamish breathes. “When they’re all overwrought like that, they find your weakness and exploit it. Carve the manhood right out of you, they do.”

The rest of the guards nod at this profound observation and I shake my head. I can’t believe I quit my job as a blacksmith to come work with these sorry excuses for men.

Actually…I can believe it.

The reason I joined the palace guard is breaking her heart crying in her bedchamber.

But I try not to think about my useless infatuation. Because that’s exactly what it is. Useless. I’ve been guarding Britta for months and she’s never once glanced in my direction. Which, to be honest, is a little surprising. Most people look at me. I’m very hard to miss. Six foot five inches tall and big as hell. I like to eat and it shows. It shows a lot. Not to mention, I’m an ugly motherfucker, all ruddy skinned and scarred. A crooked nose. So it’s a little odd that Britta breezes past me without the tiniest acknowledgement, day after day.

Not that I expected any kind of relationship to develop if I joined the guard.

I just wanted to help protect her. I couldn’t seem to sleep or eat or shape iron properly after the first time I saw her, lying awake at night worrying for the pretty, young princess and her angelic smile. Never one to attend any of the royal appearances, it was only by chance that I happened to catch the procession going past my home. A week of restlessness later, I applied for duty. They took one look at me and decided I was built to take a blow, if needed.