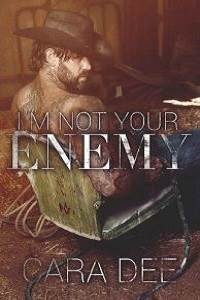 I stuck my feet into my boots as my mother rang the bell and hollered that it was breakfast.

Some things never changed. To this day, breakfast was for everyone who worked on the ranch. A dozen people dropped what they were doing and headed for the main house every morning at seven. Some had just woken up, like me, and others had been up for hours already.

I left my cabin and trailed up the hill like so many times before.

But some things would never be the same either.

Nerves tightened my stomach on the way. Rosie, my old Lab, greeted me on the big porch.

“Hey, girl.” I dipped down and kissed the top of her head. “I’ll bring you a treat later.”

She loved this time of year. The fans weren’t necessary anymore, and she could wander around the porch and be lazy wherever she wanted, rather than chasing a shaded spot or a breeze.

Once inside the house, I hung up my hat and entered the big kitchen.

“Mornin’, son.” Dad briefly looked up from his newspaper.

The others, ten employees and a cousin who was visiting, were busy filling their plates.

Mom didn’t spare me a glance. She could pretend it was because she was busy pouring coffee, but we knew better.

It was a punch in the gut and filled me with regret.

I shouldn’t have come out to them.

The black sheep of the family had turned an even darker shade of black.

Dad was at the head of the table as always, and no other seat was reserved, but one chair close to Dad was generally saved for me. Today was no exception, so I sat down and reached for a few strips of bacon and two slices of toast.

Ma filled my mug with coffee but didn’t ask what was on today’s schedule like she usually did. Her regular smile was firmly in place, though. She loved taking care of the people on the ranch, and she flitted about throughout the meal. Her own breakfast would be enjoyed in solitude when everyone was back to work and she had cleared the table. Then she’d sit here with her coffee, toast, and radio. Sometimes, it was Willie Nelson. Sometimes a Christian show.

“Mark, you need to eat more than that,” she scolded playfully. “You just sat down!”

“Sorry, ma’am, but we gotta head out,” Mark replied. He crammed a muffin into his mouth and gestured to Keith and Ez. They were driving out to the western paddock today, if I wasn’t mistaken.

Dad glanced at them over the edge of the paper, then slid his gaze to me. “Were you goin’ with them tomorrow?”

I nodded with a dip of my chin. “Yes, sir. I’m fixin’ the gate today.” The big wrought-iron gate that welcomed people to the Kidd Ranch had taken a hit after a storm last weekend.

“Ah, right.” Dad nodded too and returned to his paper. “Good.”

The rest of the meal went by with nothing but low murmurs between the ranch hands. I wasn’t very hungry, but it was gonna be a long day, and I had to eat.

I sipped my coffee and snuck glances toward Mom every now and then. She was dead set on acting like nothing had happened, wasn’t she? She’d burst out in tears and stormed out of the sitting room right after I’d told them two days ago. Since then, I’d been on the receiving end of smiles that didn’t reach her eyes and nothing else. She hadn’t spoken directly to me at dinner—or breakfast, for that matter.

It was worse than anger. I could take anger.

A few days later, I was working on the fence behind the bed-and-breakfast on our property. The storm had really done a number on us in the most annoying way. Nothing major had been damaged, just a million little things. And when the ranch spanned over four hundred acres, it was a lot of fences that needed to be checked out.

I didn’t complain too much. It took me away from the main house area, and that was all that mattered at the moment. I had to bide my time and lie low until my next gig started. Roadwork outside of Atlanta would keep me busy for six months starting on November 1. I was supposed to have another job right now, but it’d been delayed.

At the sound of a truck approaching, I straightened and looked toward the bed-and-breakfast. Dad parked right outside the building and spotted me.

I removed my gloves and reached for my water as he came closer.

Behind the bed-and-breakfast was all green grass and trees. The river had been fenced off about a mile away after too many close encounters from nosy gators. Our guests were here for a ranch experience and for the peace and quiet, not to fall off a horse when it got spooked by a gator.