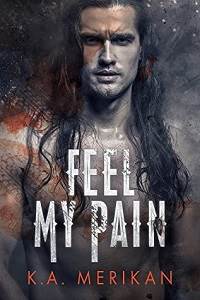 “Just fucking die already!” Hulk pinned the elephant-sized cockroach with his boot, and once he leaned all two hundred and sixty pounds of his steroid-pumped mass on that one leg, the bug disintegrated with a bone-shaking crunch.

He raised his hand as if he were expecting a high-five, but Roach felt as dead as the insect under his dad’s boot.

“Maybe if you hadn’t left a body in a freezer that isn’t working, we wouldn’t have to deal with an infestation.”

Hulk shoved at Roach’s chest with his massive paw. His biceps were so out of proportion he could have played a 90s comic book villain. “Look at this fucking smartass,” he said to Ajax, Roach’s brother and Dad’s chief yes-man. “Like I hadn’t told him to bury this sad sack of shit last week.”

Roach gritted his teeth and engaged in a staring contest with Hulk because arguing was pointless. His dad’s brain had steroid-induced holes, and trying to prove he’d never told Roach about the body was a fool’s game. Now that the stench became too strong to miss for anyone entering the cellar, Hulk was looking for a scapegoat and Roach had no doubt he'd be it.

Ajax scowled at another fat insect zooming over the grimy floor. “Just do your fucking job, Roach. It’s not that hard. You know where to go.”

“Doesn’t have the balls to do it.”

Even Roach’s temper had its limits. “I’ve been taking out your trash for five years now, so shut the fuck up. Considering how much time I spend removing corpses, I should be called Digger not Roach by now!”

Hulk squinted. At six-two, Roach was hardly a small guy, but his dad was a human bulldozer with veins bulging on his neck and arms like two pit bulls. He trapped Roach against the wall, as if he were about to torture captured vermin.

“What’d you say to me, boy? You’re lucky it’s just us family down here. I’d have smacked you down if any of the other guys heard you speak to me like that. Understood?”

“Yeah,” Roach choked out, catching Ajax smirking out of the corner of his eye. Right. Because fury focused on him meant Ajax got slack. Story of their fucking life.

Hulk stepped back once Roach’s stomach twisted so hard he was starting to feel nauseated. “Get rid of the body.”

Roach spread his arms in frustration. “So until Monday we’re gonna have a corpse here and a cellar crawling with maggots?”

“You should hardly mind.” Hulk snorted and patted the cockroaches tattooed on Roach’s arm as if they hadn’t almost come to blows seconds ago.

Roach flinched, hating the familiar touch much more than he did the punches.

Ajax put his arm over Roach’s shoulders and pulled him toward the dingy old stairs, smelling as if someone had broken a bottle of Old Spice in an attempt to smash his skull in. “Come on, I’m so done with this bullshit.”

Roach was too. He couldn’t wait to be out of the stinky tight quarters where he’d been stuck with two bears swiping their clawed paws at him for no reason.

The heavy thud of rock and roll upstairs was relief, because the louder it was, the less he’d have to listen to Ajax’s self-important bullshit. He sped up the narrow concrete stairs, itching to disappear into the crowd of visitors, and keep his distance from family for the rest of the evening. He didn’t like to be alone with either of them, so the air upstairs felt like pure oxygen to nourish his lungs, even if it was dense with smoke and liquor vapors.

With outsiders about, there wouldn’t be any more talk of dead bodies. Roach could just pick out a perfect stranger who’d been invited there by a local friend, and live his life as someone without baggage for a moment. Someone who didn’t have to dispose of poor fuckers who’d had the misfortune making an enemy of the Rabid Hyenas MC.

The band occupying the tiny stage in the back was a regular in the club bar, and while their show had less in common with music and more with the roar at a car factory occasionally disrupted by the vocalist wailing into the mic, they drew in locals. Fair enough. At the end of the day, all the performances at the open mic night were background noise for drinking and flirting. If someone treated music as an art, they’d better look for it somewhere else.

Sniffer shot Roach a tired glare from behind the giant snout that gave him his nickname. The poor guy could hold his drink so well he was unable to pretend the cacophony blaring from the speakers was anything but, and they both shared a silent eye roll. Next to him, Norm was equally silent as he nursed his beer, but as most days, he didn’t bother to acknowledge Roach in any way.