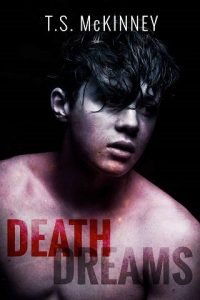 He shoved her hard enough that she fell, causing her knees to collide with the solid dirt mixed with the pine cones that littered the wooded land around her. She’d always felt safe in these woods. There was no safety now, though. She knew it. Death stared her square in the face and the only question left to answer would be whether he killed her quickly, or made her suffer for as long as possible.

“Please…you don’t have to do this,” she pleaded. She hated begging him for anything, but she had so much to live for. Her family loved her. Gary loved her. She was loved and knew she deserved to have that privilege.

“Yes, sweetheart, I sure do,” the man answered. A sound of delighted humor laced his voice as he reached down, grabbed a handful of her hair, and yanked her back to her feet. “I do have to. But, more importantly, I want to.” He laughed deliriously. “You have absolutely no idea how badly I want to.” He gave her another shove and said, “Now…keep walking, bitch. We’re almost there.”

She looked around the forest, hoping for some sort of escape, but knowing one didn’t exist. If she knew anything, it was that the man that held her life in his hands had spent hours upon hours planning this night. He’d promised her she would pay for what she’d done.

“What…what are you going to do to me?” she asked softly.

He laughed again, and she hated that she’d shown him any sign of weakness at all. He was the type that would feed on her fears.

“Bad, bad things,” he answered. “You destroyed my son’s life. I’m sure you knew I would never allow you to just hurt Joshua and walk away without…suffering the way you made him suffer.”

“He didn’t fucking suffer!” she screamed. “He was an animal! He tried to kill me because Gary loved me instead of him!”

The man backhanded her, knocking her to the ground again. She tasted blood. Furious, she opened her mouth to spew words of hate at him, but the words froze on her tongue when her eyes saw the deep hole in the ground only a few feet away from where she’d fallen. Next to the freshly dug grave was a large metal plate, big enough to cover the opening. A large crate sat next to the opening in the ground.

He flipped the button on the box cutter, causing the blade to extend. “You cut my son. You cut him with tiny little slices until there was nothing left to hold him together.”

The sharp blade sliced across her face, causing her scream in panic and pain. “Nooooo!”

He sliced again. And again. And again. He wouldn’t stop. She struggled to get away but was much too small to overpower him, and after the first twenty slices, too weak to even try. Blood slid down her face, neck, arms, chest, and legs. She knew it was impossible, but it felt like there wasn’t a spot his blade hadn’t touched. Dizziness swept over her.

The entire time he sliced and diced, he yelled obscenities at her. His hatred oozed from every pore. “You! It was all you!” he screamed in outrage. “You took the only thing I’ve ever loved in this world! You!”

She couldn’t help but notice he referred to Joshua as a ‘thing’. It had always been about the things with him. The money. The prestige. The power. She suspected his love of those things was one of the reasons Joshua had been forced to hide what he truly felt. Yes, it was this man’s love of himself that caused all the lies that had eventually led to Joshua’s death.

Yet, he blamed her.

Suddenly, the cuts and screaming stopped. The forest grew silent again, with only the sounds of his heavy breathing and her shallow breaths to be heard.

Calmly, he closed the box cutter, slid it into the pocket of his expensive dress pants, and then tucked his shirttail back in. Casually, he brushed the front of his shirt…as if his hands could somehow smooth away the blood splattered all over the stark whiteness.

“Don’t worry, little girl,” he whispered softly. “You won’t be the only one to pay for sins committed against Joshua.” Using the tip of his foot, he pushed her limp body into the giant hole that had already been prepared.

She landed with a thud and felt her ribs crack with the impact. It was her grave. He really was going to kill her. She would never see or hold Gary again. Dear God…her sister, who’d practically raised her, would be destroyed over the loss.

All around her was nothing but darkness unless she looked up. Of course, looking up would mean she’d have to see the bastard’s face bathed in the moonlight, looking down at her. Her eyes stayed locked onto the darkness. The look on his face would be smug. She hated smugness and refused to give him the prize he wanted most-to see her fear before he covered the opening once and for all.