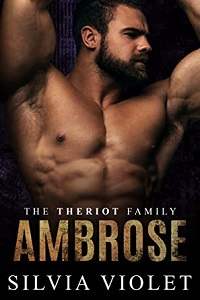 Anger burned through me as I watched the Theriots mow down every man between them and the shack where Dax’s boyfriend was being held, including the men they’d promised to leave unscathed. I’d intended to arrest those men, knowing they might just be pawns—not pure evil like the ones I’d reluctantly agreed to sacrifice—knowing they’d never get what they deserved in our justice system.

I charged toward the fight, shouting, trying to stop them, even though I knew it was pointless. I’d made a deal with a known mafia family. What the hell had I expected? That they’d actually keep their promises? I’d be lucky if I made it out of there alive.

I didn’t think anyone had heard me yell, but Ambrose turned and looked at me. His expression was completely blank, but he called out, “Go back where you were and wait for me.”

I shouldn’t listen to him. I should leave and pretend I was never there, maybe just keep on driving and disappear, send my resignation from wherever I ended up, but I retreated to the trees, then stayed rooted to the ground, gun still in my hand, staring at the carnage I’d allowed.

I snorted. Allowed? I wished I had that much power. If I did, I’d still be back in Baltimore, and my former chief of police would be in jail.

The men the Theriots had killed were evil bastards, and I didn’t truly think they deserved a better fate. Even the ones they were supposed to spare had been holding an innocent young man prisoner.

So, yeah, I could justify everything that had happened. I was protecting my new home by ridding it of drug dealers who were pushing their wares at kids. All this killing was in the name of protecting the citizens of my parish. The problem was, I’d sworn to uphold the law, and I’d moved here because I was no longer able to do that in Baltimore.

“Winston,” Ambrose called. “You better still be there.”

I looked up to see Ambrose striding toward me. I forced myself to hold his gaze, even though I wanted to look away. But not because I was afraid of him. He was a fucking crazy recluse from a mafia family, but I’d had a few days to move past that. What bothered me about Ambrose was how goddamn attracted I was to him.

“What the hell was that?” I allowed my anger to show on my face. The last thing I needed was for Ambrose to get a hint of anything else I was feeling toward him. He probably wouldn’t kill me for wanting him since his brother and cousins were all in relationships with men, but Ambrose hadn’t given me any reason to think he shared their interests. As far as I knew, he was completely straight. Even if he wasn’t, I was safest sticking to my initial impression that he was still very much off-limits.

Then there was the fact that he’d betrayed me. Why did I still find him sexy as hell after that?

The bastard grinned at me. “What you just witnessed was justice.”

“It wasn’t what we agreed to.”

“Those assholes were holding Travis in a fucking cage. Do you really think Dax was going to let them live after that?”

Dax was Ambrose’s twin brother, and Travis was the young man Dax had fallen for. “You shot them before you entered the shed.”

Ambrose’s grin grew wider. Before that day I’d been convinced he never smiled. Maybe killing made him happy. Another reason to stay far away from him.

“You’re observant. Most cops out here in bayou country aren’t so interested in the details.”

I hated how right he was. “I’m interested in everything that goes on in this parish.”

“Some things are better off ignored.”

“I could bring you up on murder charges.”

His smile returned. “No, you couldn’t.”

I had no doubt he was right. His family had connections everywhere. Any charges brought against them would be dropped. The best thing I could do was get out of there and pretend to be shocked when the call came in about the dead bodies. My last year in Baltimore had made me an expert in pretending not to know things.

I turned to leave, but Ambrose grabbed my arm. “Where the hell are you going?”

His touch sent sparks shooting over my skin. His grip was firm and determined. I could free myself if I needed to, but it would take a fight.

“Since I don’t have anyone to arrest, I’m not needed here until a call comes in.”

“No one’s going to make a call. We’ll get this cleaned up, and these men will simply be rumored to have disappeared.”

He’d told me the day before that his family would take care of things, but I hadn’t actually believed they could go that far. When was I going to learn to stop underestimating people? I’d known the Theriots could cover things up by making it appear these men had killed each other or something, but Ambrose was certain they could just wave a hand and make it all disappear. How could anyone in my department fight power like that?