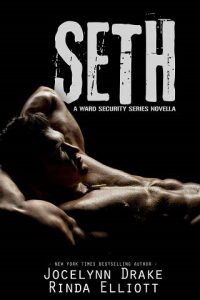 Seth Dorgan leaned against the bar, waiting for the bartender to bring him the beer he’d ordered. His eyes skimmed over the people milling around the open area. He hadn’t been to this quiet spot in downtown Cincinnati in a bit—his last few bodyguard assignments had taken him across the country.

Soft, classic rock played from the speakers, and there were a few couples swaying to the music in an open corner just past the pool tables and dartboards.

The bartender returned with the full pint glass and an inviting smile on her ruby-red lips. She leaned an elbow on the bar, giving him a good view of her breasts as they strained against her low-cut top. Seth slid a few bills across the bar, hoping the healthy tip helped to soothe the unspoken rejection. The flirtation was flattering, but she was barking up the wrong tree with him.

Off the Square was a good, low-key place to have a few drinks, meet a few friends for laughs, or if he was in the mood, pick someone up for a night of simple fun.

Tonight, Seth was looking for a little fun. He needed the distraction. Tomorrow he was attending the long-anticipated wedding of his coworker Sven Larsen to his fiancé, Geoffrey Ralse.

Calling Geoffrey a handful was a massive understatement. The man had a mouth on him that wouldn’t quit. Seth imagined he was pretty mischievous, too.

But Sven adored the ground Geoffrey walked on, and seeing his friend so joyful always brought a smile to Seth’s lips. Sven was one of the best men he’d ever met.

Seth didn’t usually enjoy weddings, but it was hard to not get pulled into the excitement. Romance was shimmering in the air. And Sven was on top of the world.

Unfortunately, the love stuff was getting to him. He didn’t want to be alone, but he also didn’t want to head out with a bunch of friends for a wild night of drinking and insanity. A couple of beers and possibly an enjoyable hookup sounded like a better alternative.

With his glass in hand, Seth found an empty seat at a high-top table, giving him an excellent view of the bar. A perfect spot to peruse the room. It didn’t take long for his gaze to snag on the sexiest man.

Big didn’t come close to an accurate description. The blond man had to stand around six foot five or possibly taller, and he had the widest pair of shoulders. Seth didn’t really have a type he gravitated more to, but there were times when he really appreciated a large guy compared to his own five nine.

Plus, he had a good fifteen or more years on Seth.

Not a problem in Seth’s book. In fact, it was a big plus. There was something to be said for experience.

When Blondie looked up and caught Seth’s gaze, a smile stretched his lips, sending a swarm of butterflies into Seth’s gut. That was a good sign.

Picking up his beer, Seth slid out of his chair and walked a little closer to see if the blond would take the last few steps. Startling sensual awareness swept through Seth when the stranger walked right up to him.

Seth glanced down at the man’s hands. God, he had a thing for massive hands and veiny forearms, and this man had both. He suppressed a shiver, looked up, and got caught in a pair of hypnotic green eyes.

Something about the guy seemed vaguely familiar, but Seth had never met him before. He definitely would have remembered.

Neither of them seemed to be able to look away from each other. Nerve endings practically vibrated with awareness, something he hadn’t enjoyed in so damn long.

“Want to grab that booth and talk?” Seth motioned with his pint glass toward an empty booth in a quiet corner of the bar.

They slid into the seats across from each other and didn’t say anything for a few moments. Now that he was up close, he guessed it was more like twenty years separating him and Liam. There were sexy streaks of gray in his hair at the temples and in his trimmed beard. He had rough good looks, his face strong and square.

Seth took a sip of his beer and set it down. “I haven’t seen you before. You live near here?”

“I’m new to the area. Only been here a couple of months. I opened a flower shop in Over the Rhine.”

“You’re a florist?” Seth would not have guessed that in a million years.

Full lips turned up in a half smile that crinkled the laugh lines around his eyes. “I know. I don’t fit the stereotype.”

“Guess I never really thought about what a stereotypical florist would look like. But now I’m picturing you making flower arrangements.” He grinned because the image in his head was of big hands tending to delicate flowers. “I like it.”