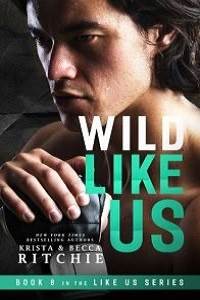 The best way to describe this situation is fucking comical.

I have to pee.

Like I might piss my pants if I don’t find a toilet kind of pee, and I’m nowhere near a toilet. I’m in the middle of a field that’s landscaped with flashing lights, a giant Ferris wheel, thrill rides, cotton-candy stands, and too many beady-eyes that follow me as they wonder what the fuck I’m up to.

Where are you running off to so quickly, Sullivan Minnie Meadows? Why are you not with your little sister or your parents at the Carnival Fundraiser? Why’d you leave them at the Tilt-A-Whirl?

Because I downed five bottles of orange cream soda. For a good cause: a belching contest with my fifteen-year-old sister. Which turned into a “first to not puke on the Tilt-A-Whirl” contest. The squirt and I were both victorious, as life should be. Our mom would say, sisters at war is the saddest adventure of all.

Thankfully I’ve never been on that gloomy voyage. Winona is all the tendons that hold my heart together. A life without her would break me.

The carnival is packed tonight, and I go from a clench-the-thighs trot to a full power-walk, quickly bypassing a corn dog stand. The reality of my situation would disappoint many gossip blogs.

You mean to say the oldest daughter of thrill-seeking Daisy and Ryke Meadows isn’t leaving for a rendezvous with a secret boyfriend?

You mean to say that she’s never had a boyfriend before?

I could’ve waited longer for those good firsts if the right guy didn’t come around. Not that Will Rochester was Mr. Forever. He was Mr. Back Then. Mr. Good for Now.

Growing up, I always sidelined the idea of romance in favor of my first love.

Boys were big fucking distractions, not that many tried to distract me, but I refused to cheat on my first love, my drive to win. Myself. But once I retired from swimming, my focus expanded beyond reaching Olympic gold. No time for romance became all the time in the world to fall in love.

I honestly don’t have much faith in myself in the romance department. It’s not like I have a lot of fucking experience there, and you can’t really train for the dating game.

At least not when the pool of people I trust is small. Like Fisher-Price plastic fishing toy-set small.

But the secret boyfriend is long-gone now. Will Rochester is in the past, and our relationship wasn’t totally secret to everyone. Just the public. Thank fucking God. I couldn’t have imagined dealing with the scrutiny of a million eyes while dating for the first time.

Water guns squirt clown targets at a nearby game booth, and all I hear is the forceful splash of water. My need to pee intensifies. “Oh fuck that last sip of soda.” I pick up speed into a slight-jog, and I’m going to outpace the two men in front of me if they don’t haul ass.

I place my hands on their backs, and at the exact same time, they glance over their shoulders. They look downward to meet my eyes, and I’m really fucking tall—especially in my worn-leather boots, I crest over 6-foot—but they’re taller.

“Go, fucking go,” I say strongly, pushing them towards the bathrooms.

They easily lengthen their stride, but they’re on the cusp of full-bellied laughter.

Akara’s brown eyes twinkle, his lips lifting as he looks to Banks, his six-foot-seven Italian-American friend. “You hear that running water?”

Banks cracks a smile at me. “You mean the waterfall between her legs?”

I’d probably laugh if I weren’t so afraid of wetting myself. “Hardy-har-har.” I twist my long brown hair into a messy bun to distract my bladder. Putting my hands on their lower backs again, I shove them forward as they skillfully weave between carnival attendees.

Akara teases, “Hey, Sulli, I hear that waterfall right now.” He glances back at me. “You hear it? Goes something like woooosh.”

I almost tinkle. Fucking God. “You’re going to regret that when I piss myself and jump on you.”

Banks is laughing his ass off.

I playfully slug his side. “Why are you laughing? I’d jump on you first.”

Banks bites down on a toothpick, mouth curved up. “You wanna jump on me, just don’t miss. It’s a long way from my body to the ground, and I wouldn’t want you to break your ass.”

I laugh hard at that, and we’re all smiling on the trek and the urge to piss actually recedes for a second.

And then we pass a long, winding line for funnel cake. Teenagers—boys and girls around my sister’s age—eye me, and their heads shift in eerie unison. Like something bizarre from Black Mirror.

I wince at the thought. Only because that’s Beckett’s favorite TV show.

We’d binge-watch all the episodes together between his ballet schedule. Since we’re not really talking that much right now, I try to push my best friend (ex-best-friend?) out of my head.