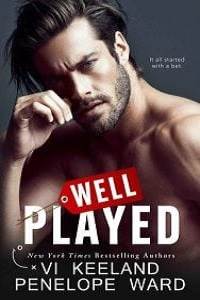 “So, have you at least run into one of those southern gentlemen the movies always show? Like Ryan Gosling in The Notebook or Matthew McConaughey in…well, anything?”

I sighed and set my cell on the bed so I could get undressed while I finished my call with my best friend, Harper, on speakerphone. “No. But I did speak to a man at the post office yesterday named Huck. He spoke with such a heavy accent that I initially thought he was speaking a foreign language. I apologized and told him I only spoke English. He wasn’t too amused. I don’t sound like that, do I?”

“Only after a few drinks. Some people start to drool after too much liquor. You start to drawl and say things like howdy.”

“I do not say howdy. But I definitely met a man this week who does. Atticus Musslewhite.”

“Is that seriously a person’s name?”

“Sure is. He’s a mechanic at the gas station in town. We went to high school together, but I’m pretty sure he didn’t recognize me. When I got here on Sunday, I pulled up to the pump, and he was standing there like the welcome wagon. He looked me up and down with a piece of actual straw hanging out of the side of his mouth, lifted his hat, and said, “Howdy, pretty lady. Welcome to Beaufort. If you need anything at all, you just give Atticus a call. I’ll buttah your biscuit.”

“Oh my God. I demand you pack up and move back here immediately.”

I laughed and sat down on the bed to untie my sneakers in front of the air conditioner. “Yeah, no Ryan Gosling yet. Though I am happy to be home. When I made the decision to move back down here, I worried maybe I wasn’t cut out for small-town life anymore. But I feel like my shoulders are relaxed for the first time in years.”

“Hmmm… Then maybe I should move to Beaufort. My massage therapist just raised his rate to a hundred and fifty an hour.”

“Pretty sure your head would explode after more than a few days. It’s definitely a slower pace than you can handle.”

Harper sighed. “I hate that you’re so far away. But I’m glad you’re finding peace. How’s The Palm Inn?”

I looked around the bedroom I was staying in, which was in better shape than most of the other rooms in the B&B. Paint was peeling from the walls, the carpet was worn so thin you couldn’t make out the pattern anymore, and a termite-damaged wood-framed window held the world’s shittiest air conditioner. “Ummm... It needs some TLC.”

“How long do you think it’ll take to get it fixed up?”

“I’m not sure. I’m working on a budget to figure out what we can afford to have done. I’ll figure out a timeline after that. But it’s going to have to be before I start my new teaching position.”

I’d lined up a part-time job teaching art and photography at the local high school. It wasn’t the glamorous life I’d had back in New York where I managed a gallery and had shown some of my own photography and artwork. But I wasn’t a glam girl at heart anyway, and I was looking forward to teaching something I loved.

“You’ll get it done,” she assured me. “My girl can do anything.”

“And how’s the best boy in the world?”

I’d had to pull my seven-year-old out of the last few weeks of classes in New York when my lease was up and we made the move to get things started down here. School in Beaufort was already out for the year, but he still had a few things to finish up, so I was trying my hand at homeschooling—just to finish up second grade.

I smiled. “Alex is happy. He made some friends right away. I was worried it might be difficult for him until he starts school here in the fall. But my mom took him to lunch with her friend and her friend’s grandson, and they really hit it off. They’ve been hanging out the last few days playing football. They’re both planning to join the junior peewee team, and they’ll be at the same camp this summer. Once the kid heard who Alex’s father and uncle were, he became sort of an instant celebrity.”

“What team does his uncle play for again?”

“Is that the same team Alex’s dad played for?”

“No. He was with the Jets. That’s how I wound up in New York, remember?”

“Jets, Mets, Nets—I have no idea where any of the teams are from.”

I laughed. That was another thing different about living in a big city versus how things were down here in the South. In New York, football was a sport that played in the background at bars. Here it was more like a religion. The whole town came out for Friday nights under the lights—not just the family and friends of the kids playing. Before his injury, my ex, Tanner, had been a second-round pick in the NFL draft eight years ago. His brother had been a first-round pick two years before that, and their dad had played in the NFL for fifteen years, too. When I left to go to New York with Tanner almost a decade ago, our little town had already sent fifty-two kids to the NFL. I was sure it was more by now.