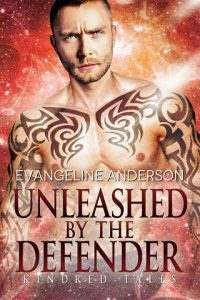 Imani put up a hand to ward them off. They were coming for her—coming and there was nothing she could do to save herself—nowhere to run, no place she could hide. The eyes would find her and then…

She woke up with a start, her heart pounding, her palms sweating.

“Stop it,” she told herself out loud, wincing at the sound of her own voice in the darkness. “Stop it, it’s just a dream. Only a dream!”

But she couldn’t stop herself from searching the dark confines of her bedroom aboard the Kindred Mother Ship. Couldn’t stop thinking that she saw those eyes watching her…waiting for her.

“I’m sorry, but I just can’t wear this—especially not to argue a case in court!”

Imani Williams looked down at the crazy outfit her new friend and advisor, Kat, had put her into with shock and dismay. It looked like something she might wear if she wanted to dance around a silver pole at a strip club—not a respectable ensemble she might put on to go to a courtroom.

The top half—because yes, it was actually a two-piece that showed her midriff—consisted of a thin band of mostly see-through pink lace that barely covered her nipples. This normally wouldn’t have worked for Imani, since she was big up top and needed serious support for her double D cup breasts. But Kat had given her tiny little devices called “float dots” to use which, when applied to the bottom of each breast, right where they met her chest, caused her boobs to lift effortlessly and look positively perky.

The float dots were nice, Imani had to admit, but putting her breasts on display like this most certainly was not.

The bottom part of her new courtroom attire was a long, tight skirt, a darker shade of pink than the barely-there lace top. It would have been okay if not for the slit up the middle which went all the way to her navel. There was a lace panel which covered her panties—also made of lace—but it didn’t do a very good job since it was mostly see-through and extremely short.

“I can’t go into a courtroom on another planet looking like a prostitute!” Imani said, turning to Kat.

“You won’t look like a prostitute, doll—you’ll look like a high-powered female litigator—this is how they dress on Yonnie Six,” Kat assured her. “And believe me, if you don’t dress correctly, they won’t give you the time of day. Those Yonnite women are ruthless when it comes to fashion.”

“But how can it be a sign of female empowerment to show off my body this way?” Imani argued. She would rather crawl under a rock than appear in this get-up in public! “Showing your body means you’re displaying yourself for a man or men and I thought Yonnie Six was ruled exclusively by women.”

“It is,” Kat said patiently. “And on Yonnie Six, showing your body is a sign of empowerment. Essentially you’re saying, ‘look at me—I can show my body and not a single man here can touch me.” She shrugged. “Because they’re pretty much all slaves.”

“Like my client.” Imani frowned, her mind temporarily diverted from her current dress debacle. “He’s been locked up in the Yonnite jail for days now and he’s scheduled to be executed if I can’t get him off.”

“What are the details?” Kat asked curiously. “I’ve heard a little bit about this from Sylvan, but I don’t know the whole case.”

“There aren’t many,” Imani admitted. “I’m supposed to get more detailed information from a Kindred informant once I reach Yonnie Six. He’s working undercover there and he’s supposed to give me evidence to use in court. But essentially, my client has been accused of murdering his Mistress in cold blood.”

“Wow!” Kat’s lovely blue eyes widened. “That’s a tall order, isn’t it? Have you ever defended a murderer before?”

“I don’t believe he is a murderer,” Imani said, frowning. “Apparently there are some very fishy circumstances surrounding the crime. But the Yonnie Peace Keeper Squad didn’t even try to find any other suspects—they just slapped my client in jail and charged him with murder. It’s not unlike some cases I’ve seen on Earth, actually.”

“So you have defended people in his position before, then,” Kat said.

Imani nodded. “I haven’t been an attorney for very long, but my specialty is defending people who have been wrongly accused and imprisoned. You’d be surprised and appalled at how many people have been locked away for crimes they didn’t commit—just because those in authority wanted someone to blame and they were in the wrong place at the wrong time.”

“You sound like it’s personal for you,” Kat remarked.

“It is.” Imani sighed. “It happened to my older brother, Rashaad.” Even now she couldn’t think about her big brother without a lump forming in her throat. What had happened to him was so unnecessary—so wrong. Every time she took a new case she thought of him—thought of the justice she would get for her client, which had been denied to her brother.