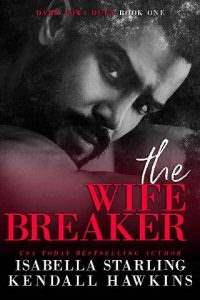 I never meant to kill her. All I wanted was to see her broken to pieces.

Every person out there has a story of hardships that broke them, and only some, a story of how they put themselves back together again.

Every person except her. Because I took that choice away from her.

Because I tampered with her strings long enough to change the course of her life. I’m the puppet master. I’m the man that dictates which path she’s going to go on with every step she takes.

Our lives have been intertwined in the darkest ways since we were both children. Promised to one another in blood, our bond was unbreakable from the moment she was born.

She was mine. Not just my wife, not just my partner.

She was a prized possession, property. Something to show off, something to treasure.

But then all of that was ripped away from me. From us.

I stare at the thick, dark stain spreading underneath me. My back is soaked in my crimson blood, my once crisp white shirt dripping with the evidence of what’s just happened.

He took her away from me.

He ripped her out of my arms and left me for dead, just like he did before.

Except this time, I don’t know whether I have it in me to fight the light that’s calling me upwards. To a safe space. A space where my parents have been waiting for years. A world with no pain and no heartbreak.

I’m tempted to let it all go. To say fuck it and leave this world broken by the way my fates were set up.

There’s someone below, a voice calling out, demanding I stay with them. But it’s not her voice, not her hands that are desperately clasped over the gaping wound in my chest, eager to stop the blood from escaping my body in thick, scarlet rivulets.

I try to breathe, but blood bubbles on my lips, threatening to choke me with its inky darkness. No oxygen enters my lungs, only more mouthfuls of the red blood that only signifies one thing - the end of my life.

“Fight for her,” the voice tells me. “Fight for your woman, don’t let this happen, don’t leave her, she’s doomed without you.”

And I think of everything that’s led up to this very moment when I’m bleeding out on the tiled floor. All the things I did to keep her tethered to me, to keep her as my toy, my possession, my trophy. Was it all worth it?

Or was it all in vain? My efforts to keep her away from the monster that tore us apart seem to have failed.

The darkness turns into light and my parents call on me to join them, their ethereal hands reaching out for me, long, inviting fingers motioning for me to leave my body here and join them in the spiritual world.

But I can’t leave this world behind just yet.

I cling on to the memory of her. My Sunshine.

Long, flowing golden hair. Eyes as blue as cornflowers. Pale skin peppered with freckles. She is so beautiful. And no longer mine.

I think of the man who took her then. The man who’s ruined my life too many times to count. He stole from me, took what was rightfully mine. I swore I’d have my revenge, but now it seems like he took that opportunity from me, letting me bleed out like a slaughtered pig while he took the only thing that matters to me anymore.

I want to call out for her, but my lips are dry and my throat is raspy as fuck. Not a single word tears itself from my cracked, parched lips as I await the help I desperately need. Shapes and colors blend into one blurry image through which I can only discern her - my beautiful captive, my prisoner, the reason I live and breathe, now ripped away from me and leaving me bare and bleeding.

It feels as if my life essence is being drained from my body. Consciousness comes and goes as my eyes fly open, then close with the heaviness of my limbs. I’m tired of this world that’s been so fucking evil to me, taking everything I ever had and more.

Maybe it’s all a dream.

Maybe my body isn’t lying on the ground, battered and broken, bleeding out.

Perhaps I’ll wake up in the warm, comfortable bed with silk sheets I paid for in blood. Perhaps I’ll be myself once again.

The tall, cruel, dominant man who in no way resembles the boy I used to be.

My childhood was knocked out of me, and I was forced into adulthood. They took away everything from me, and now here comes my ultimate test. Can I survive against the odds in a world seeped through with dark blood?

Reality fades into the background and I’m caught in a vast inky dark void where every step feels like an effort, as if I’m trying to pull my leg free from the hold of quicksand around my ankles.