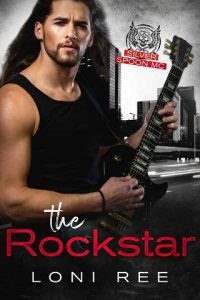 She roars into my life and turns everything upside down.

I grumble but agree when my MC President asks for a favor. His little sister needs to interview my bassist, and he’d like me to arrange it. Little do I know, my good deed will drop her right in my lap. London Montoya is the most stunning woman I’ve ever seen. And she’s mine. I’ll do whatever it takes to keep the curvy angel for life. Cash Montoya might not like one of his MC brothers dating his little sister, but he’ll just have to get over it. Nothing will stop me from making her mine.
Holy cow on steroids. Declan “Bender” Valentine is the bombdotcom. I got a sneak peek at the hot rockstar at my brother’s wedding but I was too scared to approach him. That’s not true. One look at him and my stupid heart and body melted. Since there’s no way I stand a chance with one of the sexiest men alive, I decide to avoid him at all costs. Too bad, my best friend and boss wants me to interview his bassist for our magazine and she won’t take no for an answer.
The Rockstar has his work cut out for him, but he’ll do whatever it takes to make London his. He might have to go head-to-head with his best friend, but nothing will stand in his way. He’s going to keep London for life even if he has to turn his entire world upside down to do it.

These wealthy Texans have it all—Money, looks, power, their MC and brothers. The only thing missing is someone to share it all with. There’s a shortage of eligible ladies in town but these determined men won’t let that slow them down. These MC brothers are going to turn the town of Silver Spoon Falls, Texas, on its ear looking for their curvy, soulmates.

"To hell with the rules. If it sounds right, then it is." -Eddie Van Halen

“Are you avoiding me?” Jenna, my boss and one of my oldest friends, steps into my office and shuts the door behind her. Not wanting to outright lie, I shake my head no. The little devil on my shoulder reminds me that I’ve been hiding out and trying to evade her all week, ever since she suggested the Penelope Rocha story idea. Don’t get me wrong; interviewing the badass, female bassist for Bent, one of the hottest bands in the world, is the opportunity of a lifetime.

My issue is much closer to home. “I hate to ask my brother to help me,” I admit. After seeing Penelope Rocha on a morning television show, Jenna decided the bassist would be the perfect woman to interview for our magazine, Curvy Cuties. The thought of asking my brother to help me with it gives me the sweats.

“You’re not asking him for a kidney.” She rolls her eyes. “Asking Cash to arrange for you to meet his MC brother’s bandmate isn’t a big deal.” She mouths duh, and I stick my tongue out in return.

It is a big deal to me, so I try to explain. “One of the club’s biggest priorities is protecting the privacy of the brothers.” Cash started the Silver Spoon MC years ago with his wealthy, successful friends. They don’t bring attention to themselves or participate in illegal activities, but they try to keep any mention of the club separate from their public personas. While they aren’t ashamed of the Silver Spoon MC, they don’t advertise it either. As she stares at me with a raised eyebrow, I mumble about making a mess of this explanation. “I feel like I’m asking Cash to do something underhanded.”

“You’re nuts.” Jenna drops into the chair across from my desk, shaking her head. “But if you really feel that way, why don’t you ask Cash to give you the contact information for Bent’s manager?” She shrugs. “Then contact them and beg.” One of my brother’s Silver Spoon MC brothers is Bender Valentine, the lead singer of Bent. The wildly popular band has been around for years. In fact, I had a poster of Bender on my ceiling so my teenage self could fall asleep staring into his dark brown eyes.

Growing up with celebrity parents taught me to keep my cards close to my chest. My two older brothers, Cash and Zane, are insanely protective, which made my life growing up a living hell. No boy wanted to take a chance on getting his rear end kicked to spend time with me. After graduating from high school, I decided to attend college way away from my brothers. It was great to finally stretch my wings and meet new friends.

One of my first new friends was Jenna. She introduced me to Maddie, Emery, and Piper and we became a tight-knit clan. We started calling ourselves curvy cuties when a waiter at the local Mexican restaurant called us his favorite curvy cutie customers.

During our senior year of college, the perfect position fell into Jenna’s lap. She began as an intern and impressed the owner, Ms. Milly. When the elderly lady decided to retire, she made a very generous proposal to my friend—control of the magazine in exchange for a small percentage of the profits, which we donate in Ms. Milly’s name to a women and children’s charity. Jenna became the Editor-in-Chief of the magazine, and the rest of us each found the perfect position at Curvy Cuties. Piper, Jenna’s best friend since childhood, became Assistant Editor. Throughout college, I was the group’s go-to fashion guru. After I earned a degree in Fashion Design, Jenna offered me the Fashion Editor job at Curvy Cuties. Emery is the saleswoman of our group. Her Marketing degree is the perfect match for the Advertising Executive position, and Maddie worked her tush off to win the Feature Editor's job. We’ve worked nonstop to turn the old, dated publication into a modern women’s magazine.

Seeing my four best friends every day at the office is wonderful most of the time. Until the happily married ones try to run your life. Then it’s a pain in the rear end.

Not long after we took over the magazine, Jenna fell for Ms. Milly’s son, Wild Templeton, then Emery burned her way into a hot fireman’s heart. Literally. She caught her house on fire doing flaming shots during one of our girls’ nights, and the responding Fire Captain fell head over heels for our friend. The rest of us are single, but I’m sure Piper will be the next to get bitten in the rear end by love. Electricity fills the air any time Piper and Dillon, Wild’s best friend, are in the room together. We have a secret pool going on how long it will take for them to attack each other.