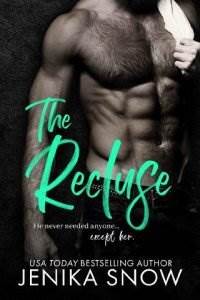 Everyone told me this was a mistake, that taking a job as a live-in cook and housekeeper for a man—a billionaire recluse—who lived out in the middle of nowhere was the worst mistake I’d ever make. They told me I’d regret it, that I was leaving my friends and family. They said I was selfish for wanting to disconnect.

Maybe they were right, but at twenty-two years old, I felt far too old for my age. I felt like I’d been disconnected for so long already. I felt like they were wrong and this decision was the absolute best one I’d made in a long time. Because it was for me. There were no expectations for this job except cooking edible meals and cleaning one man’s house.

No trying to excel at school. No trying to make people happy, to laugh at stupid jokes or always put on a smile. No trying to convince my parents that just because I didn’t have a boyfriend—that I’d never had one—didn’t mean there was something wrong with me.

College wasn’t working out, the city life was too hectic and consuming for me, and I just wanted to escape to breathe. I had no intent to make this a lifelong career, tending to a billionaire’s domestic affairs, but for a short while, it seemed like it would be a good reprieve. It would be mindless work that could let me focus on so many unimportant things.

Maybe my mind could start to heal from the toxicity that surrounded me from the world.

To be honest, I hadn’t even expected to get the job. I had no experience with professional domestic duties and had no references to back up that I was this incredible worker who wouldn’t disappoint.

I’d even been brutally honest in my application, and maybe it was that honesty that had gotten me the job. I’d written that my life was too busy, that the prospect of disconnecting seemed like euphoria. I’d been blunt, not really catering, admitting I needed this reprieve. It had only depressed me more.

I also noted that I didn’t want to make this my life’s mission, that this wasn’t a career for me. And it was because of that honesty that I really thought I’d be overlooked, seemed unprofessional and not a good fit.

But then I’d gotten an email saying the job was mine.

Room and board provided.

Honestly? It sounded too good to be true, and I was waiting for the catch.

A big part of me assumed that my new employer was probably the biggest asshole to ever walk the face of the earth. And after doing a quick internet search, trying to confirm my suspicions, all I’d come up with was that Finland Hawthorne was as mysterious as he was aloof. He was quiet, as he was disengaged with society.

Antisocial was what he’d been called many times.

But that worked well for me.

Maybe it would be like my own little oasis, a vacation where I never actually had to see my employer, where I did my job, got paid, and I wouldn’t have to worry about pleasing anyone face-to-face.

I turned onto the dirt road, the GPS having absolutely no damn clue where I was at this point, but I had a roadmap spread across the passenger seat. Thankfully, I’d been smart enough to grab one at the last gas station I stopped at when I started to notice civilization becoming scarcer and my cell coverage vanishing.

The road was bumpy and uneven; long gone was anything paved. Woods surround me on all sides, and I swear the deeper I drove up this backroad—if you could even call it that—I actually felt the temperature drop the higher I climbed.

I’d obviously done my research before applying for the job, then more research before accepting the position. He was single, a billionaire in the oil industry, with no children, and wasn’t seen much in the social scene. His home—a three-story gargantuan cabin—was half an hour from any kind of civilization. I didn’t know if he had others who worked for him to tend to such a large place, but I hoped so. Because there was no way in hell I could even attempt to keep it all clean and organized with just myself.

I came up to a set of massive wrought iron gates. There was a keypad on the driver side of the car, and I rolled my window down to reach out and press the button. I could see the camera pointed directly at me and waited with my heart in my throat as I was granted entrance.

Only a second passed before there was a buzz, and the gates opened, the doors swinging inward. I rolled my window up and squeezed my hands around the steering wheel as I pressed on the gas and made my way up the winding, narrow gravel driveway.