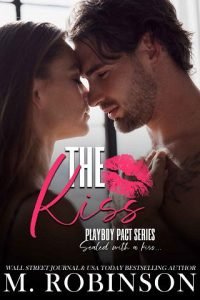 Sitting on her fucking swing in the middle of the night, freezing my balls off. It was October, and it was already cold in Tennessee. There I sat for the last hour, waiting.

We’d spent half our lives on this very swing set, me pushing her, talking about nothing… and everything.

That was our friendship.

Like Donna and David, Cory and Topanga, Monica and Chandler—I don’t know why I was comparing our friendship to a bunch of 90’s chick flick shows but here we were. She made me watch them all on Hulu.

She was my neighbor for as long as I could remember. The person I counted on to be there for me, aside from my other three best friends who were more like family too. The difference between her and them…

A pussy I wanted to have sit on my face.

I know, I know, so very vulgar. But hey, that was me. I was a guy, a dude, I scratched my balls and belched on command. I was a man who said and did what he wanted. No questions asked.

I didn’t do long term.

I didn’t fall in love.

I plowed my hose into any garden that needed a good weeding.

I enjoyed hooking up. I was damn good at it, and my reputation preceded me. In fact, my big dick was the talk of the town. Big dick Leo, it was what everyone knew me as. Not really, but a guy could dream. Don’t shit on my parade, okay? This was my story and in my story my cock was king.

Mila saw who I was, how I was. It was never a problem or an issue, more of an eye roll, and a shake of her head.

Hell, she even helped me score chicks and seal the deal sometimes. She was the best wing woman, better than my boys. Shit, our setup went hand-in-hand. I helped her score dick, get laid, go on dates.

We had a system.

We were there for each other, through thick and thin. Nothing could break our tight ass bond.

At least I thought so.

Until she started dating one of my boys. Yes, one of the three best friends I just spoke about. He asked me for permission, but it didn’t matter. She wasn’t mine. I didn’t claim her.

We were just best friends. However, a guy and a girl couldn’t just be close without emotions getting involved, right?

Yeah, I felt all of that. For the first time in my life, Mila wasn’t merely a girl I trusted and hung out with on a regular basis.

The woman I was in love with.

I was ready to break the almighty Playboy Pact.

The one I created, stood by, and lived since I was sixteen years old. For the last six years of my life, it was my code.

It represented loyalty to my other three best friends to stay single and never fall in love.

It was my idea.

Brilliant fucking idea that was!

A bond that could never be broken. A connection so strong that no girl could ever come in between us.

In order to explain, I was going to have to go back to the beginning. The very beginning that fateful night all those years ago, the night that would change the course of our lives and have me sitting on a swing set in the middle of the night, my balls now completely numb from sitting on this cold ass swing.

“How’s he doing?” I asked my best friend Leo, sitting next to him on the couch, which looked more like a bed, in his cabin while he played Halo on Xbox.

Him and his father spent months building this cabin on their land. They owned twenty acres filled with beautiful trees and greenery. Their home was massive, a full staff was needed just to keep up with the landscaping. Leo’s dad was the best general contractor in our small town of Monteagle, Tennessee. Everyone knew who Mountainside Building belonged to. He had more work than he knew what to do with, and jobs were piling up on a daily basis.

This was why he was hardly ever around, and I was pretty sure this was why he appeased Leo and built this cabin for him to have a place we could all hang out. We were on the other end of his parent’s land. We could literally do anything and they’d never know. Leo was an only child and he was spoiled because of it.

We called it a treehouse, given it was surrounded by tons of trees. It was bigger than a treehouse but still kind of built like one. It was about six hundred and fifty square feet. When you walked in, you felt the vintage vibes Leo wanted. He had an appreciation for the retro era. The cabin was a big open room and the kitchen was to the left from the front door. Vintage turquoise metal cabinets and an island shaped like an aircraft wing that Leo pulled inspiration from a 1950’s plane was what caught your attention first. There was a full-sized stove and oven, mid-sized refrigerator, and microwave. The kitchen was fully stocked with everything we’d ever need, from pots and pans to dishes and silverware.