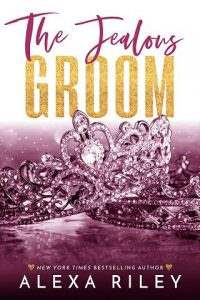 “Another dance?” Charlie asks, holding his hand out to me. He’s been charming most of the night, and he’s also not bad on the eyes, but I feel nothing. When he smiles it doesn't meet his eyes, making me think he’s trying to hide something I want no part of beyond a few dances. It doesn't hurt that I know it would piss Magnus off. He’s jealous of a man I’ve never even kissed, but he thinks he owns me.

While I do love to dance, it’s almost time to go. “Later? I need a drink.” I excuse myself quickly before he can offer to get me one.

Amber is still on the dance floor, and Henry is spinning her around. Amber and I might be twins, but she’s always the one to draw attention. She’s louder and more outgoing than I am. Most of the time I think she does it because she knows I shy away from attention. So she always makes sure the focus is on her. She’s one minute older than me and has always been my protector. She’s also the one who more often than not gets us into the trouble we need protecting from.

“Is there something I need to know?” Lindsey asks when she walks up beside me.

I’m at the small bar in the corner of the wedding reception, and she looks breathtaking in her wedding dress. The event was small but not too small, with around seventy-five guests, if I had to guess. I run my hands down my light purple bridesmaid’s dress, pretending to brush the wrinkles out as I try and buy time.

“I know when you lie.” She does, so I dodge her question.

“Is there something you need to tell me? A few weeks ago you were with Amber and me in the Greek Islands, and now you’re married with a bun on the oven.” A giant smile lights up her face as her hand goes to her stomach.

“Did you ever think this would be our lives?” I glance around the beautiful castle they’ve rented for the wedding. Flowers and crystals cover everything, and no expense was spared.

“No.” I shake my head, picking up a glass of champagne and taking a sip. This is far from the life we grew up in, and even though Lindsey isn't my sister by blood, she’s my sister in every way that counts. It’s hard to remember a time without her, and I don’t like to.

Amber and I rolled around the foster system for a while because they’d been so sure we’d get adopted. We were young and cute, but it never happened. We were tainted by the life we’d had before our mother and father were carted off to jail, and we’d forever be known as the Carlito twins. We were the daughters of one of the worst drug runners in the country, and our parents did awful things. Maybe people thought it was genetic, but our father was a terrible man and died in prison. We don’t know what happened to our birth mother after she got out, but we assumed the people she informed on got their revenge.

After bouncing from house to house, we finally ended up in a foster home with Lindsey, and she became our guardian angel. She was only a handful of years older than us, but she pulled us in and watched over us. I say she’s a sister, but she’s really been like a mother to all of us, including our brother Darian.

He’s the reason we’re now living the life of the rich and famous. Our brilliant brother came up with technology I’ll never be able to wrap my mind around. He’s gone and made himself the next Bill Gates and brought our little makeshift family with him. He found his happily ever after with Rosy, and now Lindsey has found hers with Gibson. They’re all so perfect together and I envy that kind of love.

“I’m happy for you.” I set the glass down to give Lindsey a giant hug.

She deserves this more than anyone. She worked her ass off making sure we always had food on the table and a roof over our heads. She always put herself last, and I couldn't be happier that she’s found someone that will take care of her the same way. Gibson looks at her like he’s more than happy to have that role.

“So you’re not going to tell me? You still haven't filled us in about a couple of princes demanding yours and Amber’s hands in marriage.” Shit.

“Look at the time.” I pretend to look at a non-existent watch. She gives me a hard look, and it’s one that normally has me spilling all my secrets. She’s going to make a killer mom, but I don’t have time to explain. “I have to pee.” Now that’s not a lie, because I could totally pee if I made myself.