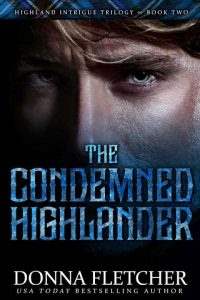 Someone was following Annis. She had been aware of it for a while now. Not only had she heard the footfalls, but she had sensed someone. There could be any number of reasons someone followed her, the most worrisome being that someone meant her harm.

Annis shifted the narrow bundle on her back with a lift of the single strap that crossed her chest and ran over her shoulder. Once done, she hoisted her garments just enough so she could run unimpeded if necessary.

It had been over a week since she left Clan Loudon to start her quest. She had taken precautions on the route she traveled to avoid the warriors Chieftain Emory was bound to send in search of her. She had no intentions of allowing anyone to interfere with her plans. She intended to be successful. She had no choice, her sister’s life depended on it.

She heard the rustle of leaves not far behind her. The harvest season certainly could produce a good wind now and again but not even a light breeze stirred the air today. She had two choices, keep walking, and wait to see the person’s intentions, or she could run to put distance between whoever followed behind her. Or did she dare…

Annis stopped abruptly, spun around, and ordered, “Show yourself, you coward!”

Her hand went to the hilt of the dagger secured in a sheath at her waist and her glance remained steady on her surroundings. A small tingle of fear ran through her, but she had learned through her own misadventures that a touch of fear proved useful. It kept one alert, and that alertness caught a movement through the branches of a large, gnarled pine tree. The branches had grown strangely, giving the tree a beastly appearance and for a moment, Annis worried what it might spit out.

Annis’s hand fell away from the dagger as soon as the woman stepped from behind the tree. Her long, braided, white hair suggested she was a woman of older years, but her face held few lines and wrinkles, and though she was tall, she had no stoop to her shoulders. It was the sight of her well-worn, blackthorn walking stick that poked a memory.

She didn’t know the woman well, having only gone a couple of times with her sister Bliss when she sought Cumina’s knowledge. A knowledge that was often sought in secret since many believed her a witch.

“Aye, it is me,” Cumina said, her steps soft and graceful as she approached Annis. “I didn’t mean to alarm you, but when I heard you left on a quest, I had to speak with you. I waited until you completely avoided the men following you so that we could talk without worry.”

Annis spotted a fallen tree and pointed to it. “A short respite would do me good.”

Cumina sat along with Annis. “You are much different from your two sisters, Bliss and Elysia.”

“Aye, so I’ve been told many times,” Annis said with a smile. “My two sisters are kind and sweet where I have a blunt nature, my all too often unfettered words proving it true.”

“You have a free, spirited nature.” Cumina smiled. “As bold and full of fire as your untamed, flaming red hair.”

Annis grinned as she tugged at a strand of the massive red ringlets that sprang from her head. “Untamed, unruly, does as it will—” she laughed. “It does sound like me.”

“Be proud of who you are. Not many have such abundant courage,” Cumina said. “I know Bliss is very proud of you.”

“Bliss is far braver than me, sacrificing herself and marrying the worst cursed lord of the three so that I wasn’t forced to wed one of them and making sure Elysia wasn’t forced to wed. But Bliss will not survive long if I do not succeed in my quest. The third and last wife of Lord Rannick of the Clan MacClaren, before Bliss, died when she first laid eyes upon him. I pray Bliss will survive long enough for me to help her. Can you tell me anything about this curse that has condemned three men to suffer such hellish lives?” Annis asked anxiously.

“I will tell you what I told Bliss. The most powerful curse there is—is a death curse. When a person uses their last breath to curse someone, it releases tremendous power. Most times the curse is made because of a wrong that was done to someone and the only way to end the curse is to right that wrong.”

Annis nodded. “That is something I have heard over and over again.”

“What you haven’t heard, and many don’t understand, about the curse is that it was not cast with a hateful heart. It was cast with a loving heart and meant to protect and keep safe an innocent bairn. When the king ordered the complete destruction of the Clan MacWilliam, the barely two-day-old bairn had no chance to survive. Her mother, Lady Aila, used the only thing left to protect her daughter.”