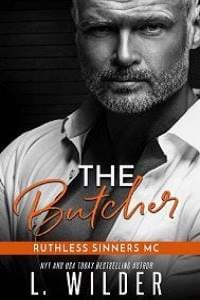 They call me the butcher.

I’m the man who washes away the sins of the most notorious gangs and MCs in the state.

You don’t just choose this line of work.

It chose me shortly after my wife died. She had a mishap with her medication—a mishap that her doctor should’ve prevented. He was a neurologist. He knew the medication he prescribed her could be life-threatening, but he was too busy, too money hungry to care that he was putting her in danger. If he had cared, she wouldn’t have died that fateful afternoon.

Knowing her death could’ve been prevented nearly destroyed me.

I became lost and hungry for revenge. I wanted to make her negligent doctor pay for his mishandling of her care, and with the help of Viper—the Ruthless Sinner’s president, I did just that.

Viper made sure the dear doctor paid for his crimes, and I used my background in forensics to make sure no one connected the MC to his death. The notorious president was impressed with my work and offered me an opportunity I couldn’t refuse.

Since that day, I’ve used my expertise to not only remove incriminating evidence from a crime scene but make it disappear. I’ve even been known to manipulate that very evidence to mislead authorities or adversaries, shifting suspicion away from my associates.

I’m not innocent in this game of cat and mouse, but let me be clear.

I’m not like the men I work with. I’m not a cold-blooded killer. I’m nothing of the sort.

When I found her and discovered what they’d done, everything changed.

Rolls shifted, and I crossed lines I never thought I would cross.

It was time to live up to the name I’d been given.

“Dad, you gotta start getting out of the house more.” Kiersten, my one and only daughter, dropped the bags of groceries down on the kitchen counter as she fussed, “It’s not healthy to be cooped up here all the time.”

“I get out.” I’d grown accustomed to Kiersten’s surprise visits. Since her place wasn’t all that far from mine, she’d stop by during her lunch break or on her way back from her college campus—which was something I enjoyed a great deal. I walked into the kitchen and started helping her unbag the groceries I didn’t need. “I just spent the entire day outside working in the garden.”

“That doesn’t count.” She perched her hand on her hip—just like her mother used to do, and scolded, “You need to be around people and have real conversations.”

“I have conversations with you.”

While I appreciated her concern, I had absolutely no desire to be around people, much less carry on conversations with them. As far as I was concerned, that time in my life had come and gone. I’d given that all up when Kiersten’s mother died. Losing her nearly broke me. It had been almost ten years, and I still hadn’t recovered. Fighting through so many emotions—shock, anger, and grief, I finally withdrew from the rest of the world and put all my focus into my work.

I knew Kiersten wouldn’t understand how difficult it was for me, so I simply nodded and said, “Okay. Okay, I’ll try to do better.”

“You know, with all the vegetables you’ve been growing out there in that garden, you could set up a booth at the farmer’s market.” She opened the pantry and started carefully placing the cans on the shelf with the labels facing front—just the way I liked them. “I bet you could meet all kinds of people there.”

Before she could finish her thought, my work burner started to ring.

Kiersten’s back stiffened as she watched me pull my phone from my pocket. She knew there was only one reason why I’d be getting a call—work. And since she also knew exactly what that work entailed, I didn’t feel the need to leave the room as I brought the phone to my ear and said, “You’ve got Billy.”

“Are you ready to play?”

The exchange was always the same. Short and simple. It was the best way to keep my clients and me safe. Grinder, the president of the Forgotten Renegades MC, sounded positively livid as he snarled, “6 Dellway Drive... You know, out at Talbot’s Corner.”

I knew the place well. The crime rate there was off the charts, which meant there was a good chance that the police would be in close vicinity—which led me to ask, “How many will be playing?”

“Four, maybe five, but you know if we are, um, playing together, we can make the game go a little faster.”

“Yeah, I think we can handle that. Give me five, and me and the boys will be on our way.”

I hung up the phone, then immediately turned my attention to Kiersten. Before I could say a word, she held up her hand and said, “You got a job?”