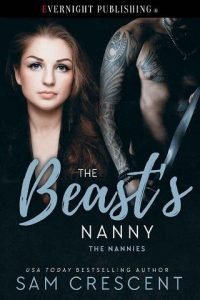 To most, being a nanny for the notorious Caleb Raine would be the dream job. You got to live in a beautiful house, food, no money worries, and when your charge was fast asleep, you had time to yourself. It sounded so amazing.

Grace Page continued to think about how lucky she was compared to most, but the truth was, no matter how amazing this job might be, she’d been kidnapped. She put a hand on her stomach in an attempt to control the sudden need to throw up.

At the sound of James stirring, she glanced behind her at the sofa in the library where he’d decided to finally fall asleep. He looked so incredibly sweet, and compared to his monster of an uncle, he really was.

Until two weeks ago, she’d never heard of the man.

She’d seen him once as he’d walked into the coffee shop where she’d worked. He’d seemed exhausted, and she’d served him coffee and a sweet cinnamon bun. Then, of course, she’d been nice to him and made sure he got a nice, full breakfast because it looked like he hadn’t eaten. He didn’t pay. She’d paid for his food out of her salary, not that she could afford it. She’d been doing a good deed, and seeing as she couldn’t walk away from those in need, she hadn’t given the money a thought. Most of the time, it ended with her short on money and having to work extra shifts or find a second job. Still, helping people made her happy.

When he’d tried to pay, she’d refused, telling him she hoped he had a good day and to take care of himself. The rest of the day had gone by without a single incident. Her life had changed that night, though.

She didn’t have a car, and on the walk home, she’d been attacked from behind, shoved into the back of a van. The fear still clung to her. The horrible smell in the back of the van, it had been urine, she just knew it. From there, she’d been thrown into a cell along with ten other women. They had all been in different states of undress. Bruises adorned their flesh and with the stories they’d told her about what happened to them, Grace couldn’t recall ever being so scared.

She didn’t like to be scared. It was why she always tried to avoid watching horror movies or anything that would make her afraid.

For three days, she’d watch as girls were taken, kicking, screaming, being beaten, knowing she couldn’t do anything to save them. On the third day, she’d recognized Caleb. He’d come into the room, glanced over the women, and without speaking any words, he’d grabbed her arm, pulled out a gun, shot the three men, and told the women to get the fuck out and to keep what happened to them to themselves.

He hadn’t let her go.

She’d been shoved into his car, driven to his home, and told if she tried to leave, he’d kill her. If she thought of calling the cops, he’d hurt her. There had been a lot of threats, which she blurred out. He’d then dumped her with James and told her to take care of him. The little boy was three years old and so talkative. Everything she’d learned about her captor had come from him and the few conversations she’d heard from Caleb’s men when they didn’t realize she was there.

Working her fingers, she pinched herself, hoping to wake up in her apartment. She’d give anything to be back there now and not here. This place, with all of its beauty, held so much sin and fear.

James let out a moan and she turned toward him, bending down and smiling. He opened his eyes and he let out a chuckle. He was such a good boy. Lifting him up in her arms as he wrapped his arms around her neck, she picked him up, hiking him onto her hip as they left the library.

“I know. You’re always hungry.” It seemed every couple of hours she was feeding him. Caleb had a very extravagant cook, but he refused to do anything for a young boy’s palate. James didn’t want to eat garlic-drenched scallops, or lamb, or whatever the hell kind of fancy stuff he thought was suitable.

When she’d tried to make James something, the chef had gone mad, throwing knives and threatening to gut her. He’d been so loud, Caleb had come, and then she’d been even more scared as Caleb had taken one of the knives and slammed it right through the chef’s hand.

With the chef screaming in agony, he’d turned to her and asked what the hell was going on. She’d stumbled over her words, but the following day, one of the guards had told her she could cook whenever she liked.