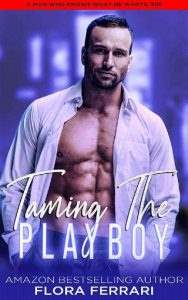 It was the hardest time of my life when I lost my dad in an awful accident.
I move in with my best friend, Jane, and try to keep it together. Remaining in college is difficult, but I do my best not to drop out.
“You didn’t fail,” Jane tells me. “You just need a break.”
I know she’s right. And it’s a bright moment when Never Alone, a charity that helps people like me, offers to fund the legal case.
When I search the charity online, I see the founder.
Logan Locke, forty-one years old, six and a half feet tall, dripping in so much muscular steaminess I can hardly take it.
He’s an ex-football player, a philanthropist….
And a playboy.
He’s always in the tabloids, at parties with different women – models, actresses, and socialites.
Women I could never compete with, let’s face it. I’m a twenty-one-year-old college dropout with dreams of being a counselor.
Plus, I’m not built like a model or an actress. Plus, I’m also a virgin.
It’s eight months before I meet Logan – eight months of dreaming, wanting, and wondering.
And knowing he’d never want me back.
Then suddenly, he’s all over me, kissing me fiercely, telling me he only wants me, telling me it’s complicated and I’m his everything. He’s burning up with possessive and jealous heat.
But can I do it? Can I really tame the playboy?

I thought there would be some twisted joy in seeing Joel Hammersmith sentenced. I thought it might make the darkness a little brighter, the feeling of loss a little less difficult to take.

I’m standing, hands clasped in front of me and tears streaking down my face, as the guards lead him toward a room in the back.

As Joel walks across the courtroom, it strikes me how small he looks, how shrunken, not like the demon I wish he was.

Our eyes meet, and he frowns. He’s got white hair combed over his mottled head. He looks confused, his eyes shimmery, and then he’s gone.

“He deserves it,” Jane says from beside me, softly touching my arm.

She’s right. Eight months ago, Joel decided to drive drunk to the store. He testified that he was only there to get some cigarettes. But that’s when he took a corner too fast, didn’t see my dad crossing the street, and….

And I always find it difficult, if not impossible, to think of the next bit. To imagine in realistic terms what happened. Not that I need to imagine. They let me see the body, but it’s hazy in my mind, as though I want to black it out.

I want to black out so much.

Joel ran. That’s what makes it unforgivable. He drove away and left Dad there all alone.

Once Joel is gone, the judge dismisses the court, and we’re free to leave.

My tears have dried, leaving me feeling sort of disconnected and numb. It’s not an unwelcome feeling, especially considering how preferable it is to the other thing, the darkness, the gnawing away at any positivity I could ever have felt.

I’ve known Jane Lane since we were in junior high.

She’s tall and glamorous, with a mess of blonde hair tied up in an artistic bun. I notice several men side-eyeing her as we leave, though she’s wearing her formal court gear today.

Jane’s the sort of person who effortlessly laughs when people tease her about her rhyming name. Her parents, to this day, don’t see anything wrong with it.

Jane has been my rock these past eight months.

“Sure,” I say, pushing the door open and stepping onto the court steps. “If you’ve got the time?”

“Self-employed, babe. I’ll file a complaint with my boss.”

I laugh, so grateful she’s doing this with me. She works as a freelance writer, mostly fiction online, and her word count is always in the tens of thousands per week.

This isn’t a high-profile case, just another sad circumstance that happens every day. As we walk down the steps, I hear somebody running to catch up from behind us.

I turn to find the prosecuting lawyer, Frederick Simmons.

He follows down the stairs after me with a broad smile. He’s a better lawyer than I ever could have afforded for Dad’s case, supplied by the Never Alone foundation, a charity run by Logan Locke, an ex-football star.

My skin gives a subtle shiver, my heartbeat picking up a little, though I know it’s pointless.

Frederick absentmindedly touches his black ponytail as he speaks. “Sorry to chase you. I just want to say congratulations. That’s one hell of a sentence.”

“One hell of a sentence,” I repeat, nodding, trying to summon some gratitude.

It’s not fair for me to be so distant. Logan hired this top-of-the-food-chain lawyer, meaning Joel’s most likely going to end his days in prison, but I don’t feel a thing. Just tired.