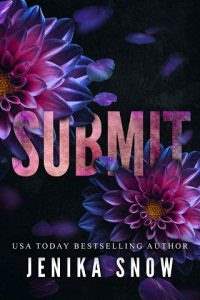 “On your knees.” Dietrich gripped his riding crop tightly in his fist as Stellan sank to his knees. His sub had shed his clothes as soon as he ordered it, and the light and shadows mixed well with the contracting of his muscles. “Who owns you, Stellan?” He ran the crop up the hard ridges of Stellan’s abdomen and felt his dick twitch when Stellan’s muscles clenched, showcasing a prominent six-pack.

Dietrich lifted Stellan’s head with the tip of his crop under his chin. His submissive’s light blue eyes locked with his, and his dick hardened further. A glance down showed Stellan’s cock was at full attention.

“Are you hungry for me?”

His reply was instant. “Yes, Sir.”

Dietrich let himself get lost in the feel of his sub’s tongue lapping at his slit, drawing his seed from him with so much expertise it rivaled an artist fine-tuning his instrument. “Take it deep. Swallow me whole.”

Like an obedient sub, Stellan did as he was told. Dietrich ran the crop along his shoulder, down his side, and over the hard, muscular curve of Stellan’s ass. With a flick of his wrist, he brought the crop down upon the tanned flesh.

He loved how his sub tensed then groaned in his own pleasure. With pain brought pleasure, and Dietrich would bring forth an ocean of both this evening.

Blythe Winters adjusted her skirt as the elevator ascended to the twenty-fifth floor of the Cosmopolitan Building. The doors in front of her were a brushed copper color, and her reflection was fairly clear.

She’d twisted her dark blonde hair in a stylish, yet simple, chignon. Taking a step closer to the mirrored panel, she ran her finger under her eye to make sure she didn’t have any residual mascara. Blythe hardly wore make-up, and when she did, it was only for special occasions. Today was definitely a special occasion.

The rain had caused the air to become damp, which in turn caused her two-year-old ankle injury to ache something fierce. She bent and absently rubbed it, willing her anger and despair over everything she had lost to become buried deep inside of her.

Now was not the time to reflect on what she lost, not when she was about to meet one of the wealthiest men in America.

Smoothing a hand down her outfit only caused her to feel the bumps and dips of her oversized body. Maybe a size sixteen wasn’t all that bad, but after her accident, she had ballooned out. Her once size two frame now seemed like a distant memory.

Food had become her friend, her calorie-filling, weight-gaining friend. She’d gone down a very depressing road, and although her body had changed drastically after the accident, no longer the toned and lithe physique of a dancer, she tried in vain to find something she loved about herself again.

Being a temp had its ups and down. This particular job being one of the ups. When she got the call last night about a position that needed to be filled immediately, she had jumped on it. Not only was she going to be working for Dietrich “The Bear” Moore, CEO of Moore Industries, she was also going to spend one month in Europe with him as his PA. The downside to it all was she was working as The Bear’s personal assistant. It was no secret that Mr. Moore was a real hard-ass and control freak, but Blythe could overlook all of that because, despite this being only a temporary position, it would pay her bills and she’d get a trip out of it.

The elevator dinged when it reached its destination, and she took a deep breath. She was usually nervous on her first day on the job, as was normal, but today brought on a whole new sense of hesitation.

The doors opened, and she stepped into the lobby. A sophisticatedly decorated lounge stood in front of her. Dark leather furniture and masculine décor was no doubt professionally placed. A glass and chrome reception desk sat directly in front of the elevator, and Blythe moved toward it.

The young man behind the desk spoke rapidly on the phone. He held up one perfectly manicured finger as he finished his conversation. After the phone was set back in the cradle, he looked at her expectantly.

“Oh, yes.” He grabbed a manila envelope and stood. “This file contains Mr. Moore’s personal and business schedule. You’ll need to have it down pat.” He walked around the desk and handed her the folder. “Laura had a family emergency, so she won’t be here to get you up to date on Mr. Moore’s schedule, so it’s of the utmost importance that you know this file from front to back.” He made his way down a long hallway, and Blythe had no other option but to follow.