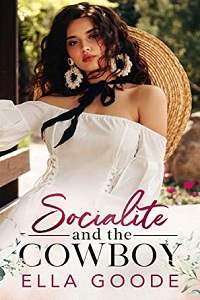 “The blue diamond and the Vail property shall be given to Birdie Rodgers free and clear of all debt provided she comes to stay at the XRV Ranch for three months. The remainder of my estate, including the land and all stocks in XRV Enterprises, shall go to my nephew, Calder Justice.” Fred Mason closes his padfolio and peers over his small gold spectacles at my cousins and me. “Any questions?”

All heads except mine turn toward the widow. Dressed in all black with a heavy veil, it’s hard to see her expression, but I don’t need to be a mind reader to guess what expression is painted across her face today. She’s pissed. Widow Justice gave up five years of her youth to cater to an ornery old man, and this was to be her payday. Instead, she got a measly pension of twenty thousand a month, which is a lot for most people but not for a Justice woman. Justice women are dripping in diamonds and pearls, with custom made clothes from labels that no one but the super-rich have even heard of. They ride in tricked-out Bentleys or Rolls Royces when they aren’t being flown in their private jets to the latest spa retreat in Vail or Maldives. Even though they live on ranches, there’s never a speck of dust on their shoes. The army of staff see to that.

No, twenty thousand a month won’t cut it for Widow Justice.

“No questions, Mason. Thanks for coming out. The ‘copter is ready to take you back to the city.” I get to my feet, and all four of my cousins do the same. Widow Justice has not moved. Maybe she’s thinking if she sits there long enough, the contents of the will are going to change.

Tucker waves a finger toward the stiff back of the widow, and I shake my head. Leave her be, I relay silently.

We file out of the office and make our way to the back veranda.

“Come on, Mr. Mason, let me carry your bag for you.” My youngest cousin, Sterling, takes hold of the attorney’s case and leads him off to the helipad.

A fat brown cigar appears in front of my face. “Here.” It’s from Cane.

I take it and stick it into the corner of my mouth. “We celebratin’ or mourning?”

“What’re we going to do about Mistress Justice?” Cane has always called her that, from the moment she stepped foot onto the ranch.

“Not much we can do. Doesn’t seem right to kick her out.”

“Who’s this Birdie Rodgers that he gave Grandma’s diamond to? Know much about her?”

Blake sticks his cigar in front of Cane’s lighter. “Heard she’s some socialite from Dallas. A Neiman girl. Goes by the name of Ladybird.”

Someone who likes shopping then. Nothing wrong with that.

“Up to ears in debt,” Tucker adds. “Got a whole addiction or some shit.”

“You think she’s going to sell the diamond?” I ask.

“Blake, you contact all the buyers in the Dallas/Fort Worth area and make sure they know we want that diamond.”

He puffs a few smoke rings before saying, “What’s the limit?”

“Don’t have one, but if they’re trying to squeeze us, it’ll go bad for them,” Tucker answers for me. He’s the money guy.

“Where are we going to put her? In the cottage or here?” Cane wonders.

“Here. We want to keep an eye on her.” I tap the ashes of my cigar over the edge of the porch and onto the grass.

The Justice land stretches out as far as my eye can see. Back in the day, we used to have up to fifteen hundred head of cattle grazing, but as Texas has grown, so has our business. We aren’t just land and steers, we’re semiconductor chips and solar panels. This vast space represents three generations of blood, sweat, and tears. It’s my job now to see that the Justice fortune multiplies to feed the next brood of Justices, which means any possible threats need to be monitored. This Ladybird person’s connection with my uncle is a surprise, and we don’t know what it entails.

“I’ll go fetch her,” Cane offers. “I need to go into the city anyway to check on the closing of the downtown retail plaza.”

All four jerk around in surprise. Everyone knows I hate the city. I hate the traffic, the pollution, the people. I was born for the ranch life, and since I came back from Stanford ten years ago, I haven’t left other than to attend the occasional business meeting.

“You’ve got a bad feeling?” Tucker guesses. His face darkens.

I shake my head. “Just a feeling. Not sure if it’s good or bad yet, but a storm’s coming.” I glance out at the cloudless horizon. My hunches are never wrong. It’s like I was born with some kind of magic. I know when to walk away from a deal, when someone’s trying to cheat me, when one of my own is in danger. I’ve steered the Justice ship for nearly a decade based on those hunches and multiplied our coffers by an unimaginable amount. Everyone here relies on me because of that.