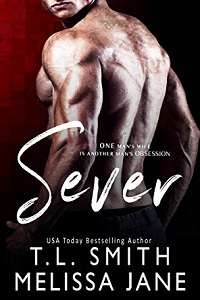 He looks at me with an apathy that causes my hands to ball into tight, white-knuckled fists. His stare, loaded with contempt, has me itching to slap his five-o’clock shadowed cheek. But worst of all, the ever-formidable look of indifference has me pulling the sheets higher while I allow my already hurting heart to further break into tiny, irreparable pieces.

If I could count all the ways I love this man, I would. But it’s tiring, so fucking tiring, because I can’t bring myself to want to remember the reasons why I still love him.

But let the record show, he gave up first, and I hate him for it.

He let the love we’ve shared turn sour, and it’s all by his own doing. He took all I had to give, my heart, my passion, my life, and he held it in his hand and squeezed his long fingers around my vulnerability until everything oozed between the cracks.

I miss the feel of his hand resting on the small of my back, a gesture to let me know we were a team no one could challenge. How his lips would crush mine with a primal urgency he’d barely contain throughout the day.

Urgency is a thing of the past, and my husband is no longer a team player. He exited this marriage over a year ago when he concluded we no longer required the fundamentals to make it work.

There are no tender moments.

Not even a whisper of his fingers brushing mine.

He ignores my efforts to regain his affections. My perfect hair and makeup go unnoticed despite being to his particular taste. My lasered, smooth body remains unseen by his now dispassionate eyes. I can’t recall the last time my husband lusted for me. His hunger to claim my body and mind was once uncontrollable, and his desire to bring me to my knees craving more until I fell limp at his side came to a crashing halt. Like a light flicking off, so did his taste for anything me.

He left me cold, unsatisfied, and unloved.

And now I’m left to wonder what had gone so terribly wrong that I deserved to be abandoned in the dark without a hint of a clue. Not only did he switch off his love, but his communication became non-existent.

When it first happened, I remember the many nights I broke down at his feet, pleading for answers, and he would look as though the words were on the tip of his tongue, like he wanted me to understand. I even saw anguish, his own hurt, a pain I knew nothing of before he’d shut down. And then his eyes would glaze over and indifference set in.

It was then I stopped pleading.

My desperation turned to anger and my anger morphed into my own indifference. One he didn’t question or care for.

He hasn’t asked for a divorce. The word has never left his perfect lips.

Despite everything, I still love him.

I went through our seven-year marriage thinking he would be my last love, but now everything is crumbling around me and there’s fuck all I can do to stop it.

Shawn steps out of the shower, a towel wrapped low around his waist revealing perfectly sculpted abs and a V-line I used to love running my tongue over. There isn’t an inch of him I haven’t explored and vice versa. Water glistens over his tanned skin, and when he eventually turns to me, he catches my roaming eyes. Perhaps my own indifference is a work in progress because he still has the ability to suck me in.

His eyes lock onto mine and I hold my breath as he moves to his side of the bed. His gaze travels my body, from the fallen strap of my nightie revealing the milky skin of my breast to my exposed leg curled around the tangled white sheet. I see a hint of something I can’t quite determine and my heart races, clinging to false hope that he’ll find the courage to claim me again as his wife. I hold hope he’ll lean down and kiss me, assuring not all is lost. At this point, I’d settle for a simple graze of the cheek so I know he still cares.

Worse than that, there’s not even a hint of wanting to do anything.

My heart drops and the rage I keep at bay resurfaces, hot blood coursing through my veins. Shawn turns away without a word, and I scream on the inside, wanting to hurt him the same way he does me. Instead, I climb out of bed and walk straight to our walk-in closet where I close the door, wishing I could be anywhere else but in the same house as my husband. Yanking the nearest designer dress off its hanger, I ball the thick fabric into my hands and scream, the muffled sound no doubt falling on deaf ears. I scream until my lungs hurt and my hands ache. I hear his footsteps a heartbeat away from the door and I feel a false sense of hope. The same I feel every time only to be crushed. I still, holding my breath and sob, my ear inching closer to the door, listening.