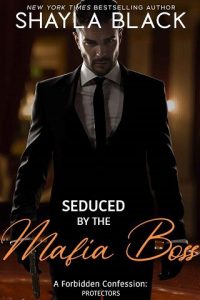 This Saturday night in Vegas is shaping up to be anything but the usual. Sure, the casino is hopping. People happily toss their money on the tables, hoping Lady Luck will smile on them. I scoff. As if mobster Marco Donzelli would ever let the house lose its ass.

But the big boss is up to something. Shit is going down. I feel it. So it’s a fucking bad time for this call.

“What do you mean ‘she’s gone’?” I hiss into the phone, locking myself in the john so no one can hear my business.

Ryan, my old pal doing me a big favor back in Big D, sighs. “That redhead you’ve had me watching? She ran a few errands this morning, came back to her apartment, then headed out a while later, rolling a suitcase.”

“What?” Kristi Knolls had nothing important on her calendar today. I should know. I hacked into her phone and started tracking it—and her—months ago.

She doesn’t know it yet, but I’m coming for her. I have plans. Soon.

No way she’s escaping me.

“Yeah. She was rolling a suitcase, then she climbed into an Uber. I followed her to the airport, but I lost her at security.”

Because Ryan wasn’t getting on a plane, and she was.

“Any idea where she was heading?”

“Dude, it’s DFW. She could be flying anywhere. The only thing I know is, the terminal where the driver dropped her isn’t usually one used for international flights.”

That’s not super helpful. But Kristi’s sudden itch to travel is only one of my problems tonight. “Thanks. Keep your eyes open.”

“Sure. Anything else you want me to do from here?”

“Hang by the phone.” If I can’t get a bead on Kristi in the next few hours, I’ll have Ryan break into her place and search it.

I hang up, swear, then flush the toilet and wash my hands for the sound effects. Donzelli, along with a couple of his capos, Sal and Rudy, are hanging out in his suite overlooking the casino floor, eyes peeled like they’re waiting for something to happen.

I’ve got a bad feeling…

Dragging in a steadying breath, I let myself out of the can.

I hate answering to that name almost as much as I hate Sal Barone. I shoot him a withering glare, wishing I could dust the son of a bitch. But Donzelli would see that as a personal affront since the old-timer has worked for him—and the organization—for a few decades.

Instead, I sneer. “You asking because you need help these days, old man?”

Sal loathes me, and it shows on his face. Not that I have a fuck to spare him.

“Marco, your new consigliere needs to learn a little respect.” Sal punches his fist into his palm, demonstrating how he’d like to teach me.

His usually silent sidekick, Rudy Pomelli, nods like the hulking, brainless yes-man he is.

It takes effort not to laugh. “You’ve never shown me any respect, asshole.”

“Because you didn’t earn your position. You had it handed to you by your late uncle, who was a good man, God rest him. You’re just a shit stain trying to live up to his reputation.”

Before I can tell Sal that he doesn’t have a bite hard enough or a dick big enough to pull off the shit I can, Donzelli steps in. “Are you questioning my judgement, Sal?”

The old-timer finally has the brains to look nervous. “No. I wouldn’t do that, boss. I’m just saying I think his uncle Luca oversold him.”

And Sal thinks Donzelli elevated me from capo to consigliere out of guilt. He’s probably right, but whatever. It works to my advantage.

“Shut the fuck up. Too bad the feds didn’t use you for target practice instead of him.” I take a swipe at Sal, more because it’s expected than because I think it will shut him up.

“Gentlemen…” Donzelli warns, rising from his leather throne, wearing another one of his custom suits. Since he dropped five grand on it, I’m not shocked he looks way more distinguished than the average CEO. Probably why he gets a lot of ass. Well, his suit and intimidation. He’s damn good at that, along with his old-fashioned mobster shtick. His slicked-back hair with equally greasy manners annoy me. I’m half expecting he’ll call the next cocktail waitress who offers him a refill dame.

He’s a fine one to talk, but I don’t say a word, just raise a brow. The asshole’s day is coming. He deserves a bullet in his brain, and I hope I’m the guy pulling the trigger.

“That’s enough,” Donzelli growls loudly enough to convince Sal that he’s been as lenient as he intends to be.

Marco gives him an absent nod, then makes his way across the darkened room to the decked-out wet bar below the mirrored wall. He plucks up a glass and turns to me. “Scotch?”