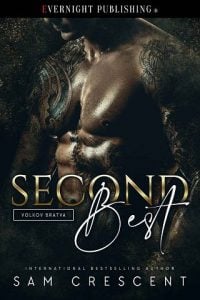 I always knew I was going to die.

My life was destined to end this way right from the start. Staring down the barrel of a gun, pointed at me by my own husband, I was shocked that I was so important that one of the worst men in the Volkov Bratva needed to kill me. The moment I married into this world, my days were numbered. The fact I’d lived this long was a miracle.

Tears filled my eyes, and I hated that they made me look weak.

I wasn’t surprised that I was the one on my knees. It took every ounce of strength not to give anything away. Would he kill me if he knew the truth?

I’d never betrayed my husband or Ivan Volkov, the leader of the Bratva, my husband’s boss. The moment I’d been with him, I’d been loyal to him, to the entire organization, but it meant nothing now.

My husband wasn’t known for his patience, and I was shocked I wasn’t dead already. It wasn’t like he wanted to be married to me. Like so many things in my life, I was the second-best choice. The real woman he probably wanted was my sister, Isabella. The beautiful one. The one my father couldn’t bear to sacrifice to the disgusting Bratva bastards. Me, Aurora Fredo, the second daughter, the ugly one, I was the one he gave up freely. All my life, it had been so easy for everyone around me to pass me by.

I was friends with many but not cared about at all. Kind of crazy. I was the nice one. The one people said was sweet and kind, but didn’t give a shit about. I was the one they didn’t invite to parties, or they spent more time ignoring me. It was something I’d gotten used to.

My family was worse than that. I was the embarrassment. When we went to dinners, I was placed so far away from them, people had no idea who I was.

Passed over, time and time again.

On my wedding day, men gave their condolences to the man who stood before me.

Something new and never before heard of. Ivan Volkov was determined to set about a new era, a modern world for the Bratva, but to do that, for one section of the States he controlled, he needed his head man, his brigadier, Slavik Ivanov, to bring a conclusion to all the bloodshed with the mafia family.

I was the sacrifice in that mafia family.

Our marriage drew peace between the Italians and the Russians, supposedly.

The moment my father placed my hand in Slavik’s hand, my fate had been sealed and along with it, this moment.

There were times I thought it would be different. He’d made me believe I meant something, but like always, I was second best.

I wasn’t worth anything to anyone.

I’d lived with this knowledge for years. Some days, I could pretend it didn’t matter, that I wasn’t hurt by it. Then something would happen, a statement, an action, and it would awaken all the wounds I kept hidden.

Now, it was finally going to be over.

I closed my eyes and waited for the inevitable bullet that would finally end my miserable existence and set Slavik free.

The party was boring.

Women stood in their little groups, gossiping amongst themselves. Some of them glanced in my direction. The Italian mafia-made men mingling with the same version of the Russian ones. I wasn’t exactly sure of the full details as to what they were all called. What I did know was Slavik Ivanov, my husband, was like the Capo in his world. Even though we were parted by twenty-one years. He was forty years old, and I was nineteen, but in this world, age didn’t matter.

Sipping on my champagne, I held the glass in my hand, counting to ten repeatedly to try to calm my nerves.

I’d been married a week. The event had been a huge success. The press had been there to take pictures and to announce it in the paper. My father hadn’t wanted to give my perfect, beautiful sister to such a man, but me, he had no problem. Put my hand in Slavik’s and ignored me for the rest of the day.

Even the following morning, I’d done our family proud by bleeding. On our wedding night, my husband had made me bleed. I was sure a lot of virgins did on their first time.

The night itself was kind of a blur.

Slavik and I didn’t talk.

No words were whispered or spoken out loud. To anyone who’d look at us, we’d been nothing more than perfect strangers. He hadn’t touched me since, which was a blessing. In fact, at night, I slept alone.

The pain had been … well, it wasn’t something I wished to repeat.

When we’d gotten to the room, he’d pulled the covers back, tore my dress off with his knife, and I’d lain down and closed my eyes as he climbed on top.