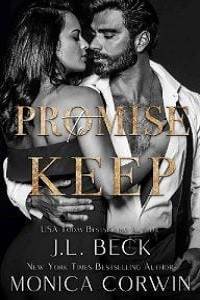 It was always too good to be true.

He was too good to be true.

Hadn’t life taught me that lesson over and over again, blow after blow? To be happy means a much harder fall to the bottom. And while I’m not dead yet, I’m buried in the pain of the only choice I’m left with.

But pain is an old friend. I can handle it.

I just don’t know if I can handle losing him.

It doesn’t matter, not really, when the only thing I need to think about right now is getting out of here before Adrian comes back and sees the truth stamped across my face. He reads me like a book, so there’s no way I’ll be able to keep this from him—not something this important. And there’s no way he won’t be able to punish me for it, even if it kills him too.

I race back to our bedroom, my bare feet slapping on the polished floors. Everything in our bedroom looks the same, yet now it feels different, like it’s holding its breath until I’m gone.

I stop for a moment, breathing deeply, skimming my fingers over my still flat belly. It hits me. This is the same hand I used to give my father that gun. The gun that killed Adrian’s mother. The realization makes me jerk my fingers away, coming full circle.

I have to run.

It only takes me a few moments to gather a few pieces of clothing, some jewelry I might be able to sell, and my phone. Nothing else. I’m careful only to take the things he gave me. I don’t need any more sins staining my conscience. I don’t need to give him another reason to hate me.

I grab a coat because I don’t know how long I’ll be outside once I’m gone and slip my feet into some practical flats Adrian would scowl at if he saw me wearing them. Not because he particularly cares about my footwear, but because he enjoys seeing me dressed up, dressed up by him.

This time, I’m silent as I tiptoe back into the hall toward the foyer. It’s one quick jaunt down the stairwell, and no one will even realize I’m gone until it’s too late. Kai and the crew have all been distracted since the attack, and now with the council breathing down Adrian’s neck, of course they aren’t watching me closely.

No one expects me to leave.

But it’s the only thing I can do to save Adrian and our baby.

I make it to the emergency staircase, and my hand is on the knob before an age-marked hand clamps over my wrist in a vise grip. Rearing back, I jerk my hand loose, intent to run, only to find Cook standing there wearing her usual scowl on her face.

“Where do you think you’re going?”

I swallow the truth and scramble for a believable lie. “Just going out for some air. I wanted to take a walk and thought I should go while it’s still daylight.”

When she narrows her eyes, the usual steely glint turning sharper, I know she doesn’t believe a single word I just said. “Nice try, girl, but you’re going to have to do better than that if you want to convince the guards at the bottom of the stairs.”

Crap. I rarely go outside without Kai or Adrian with me. Those guards must peel off when they aren’t needed. “How many are there?” I venture, studying her face for any clues.

She wraps her hands around her wide hips and jerks her chin at me. “Two, but all you need to do to get past them is act like the high and mighty pampered princess they expect you to be. Own the fact that you can walk out of here at any moment, and they won’t question it. You might be tied up here like a princess in a castle, but to them, you’re still the princess, which is a hell of a lot higher than their rank. Own it when you get to the bottom, and they won’t question your ability to go freely.”

I grab the handle again and pause. “Why are you helping me? You don’t even like me.”

Her apron shifts, pulling tight across her ample frame as she shrugs. “I don’t like or dislike you. But I also don’t believe in holding someone hostage if they want to leave.”

I open my mouth to tell her I don’t want to leave, but then I clamp it shut again and simply nod.

This time, she gently grips my hand over the door handle and turns it for me. “Get going now. You don’t want to be out when it’s dark.”

The urge to hug her swamps me, but I tamp it down since she won’t appreciate the gesture anyway.

I make it one flight of stairs before she calls after me. “Don’t forget to get rid of that tracker in your arm. It’s the first thing they will use to find you.”