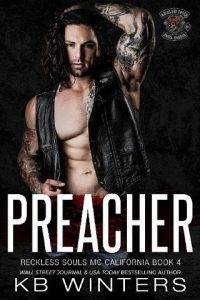 When a blue-haired hacker with lips made for sin, steals from us, I break into her bedroom to see what I can find.
I didn’t expect to be so drawn to her.
Gia’s not like any woman I’ve ever met. She’s strong, independent, and she doesn’t take crap from anyone – including me.
She’s desperate to cooperate now, but can I trust her?
And if she lies about the theft, what else is she lying about?
I need to find out the truth, but I can’t resist Gia for long. She’s under my skin and in my blood.
And the more I get to know her, the more I realize she’s not only a hot headed thieving minx, she’s in deeper than I thought.
The Kings want her to do their dirty work, but I’ll do whatever it takes to keep her safe.
Even if it means putting my own life at risk.

I grab the rolled-up dollar bill from my best friend’s hand and snort another line because why the fuck not? I feel the hit and give a satisfying sigh.

It’s a party. I have no place to be in the morning, and everyone here except my bestie, Romina, is boring as fuck.

I offer a line to her again, but Ro shakes her head, thick black curls swishing across her shoulder. This time she pushes my hand away.

She slides a finger under her nose, her dark eyes wide and alert as she reaches for her beer.

“The booze is plenty, unless you got a joint to even me back out?”

I shrug and scan the people inside the house on Elm Street. I know most of these people and consider many of them actual friends, as much as I can be friends with people I hang out with for the sole purpose of getting wasted.

Drunk or high, none of us care as long as we can escape the shit that is our lives for just a little while. I spot Jason over by the keg set up in the kitchen. He always has weed. “I’ll see what I can find, Ro.”

“Be careful,” she calls after me, and I wave her off.

Jason is a bit of a sleaze, always trying to get in my pants, but he knows exactly where the line is, and he never crosses it. I can handle him, and when I want something, I handle him really well.

He looks at me with a hungry grin, his blue eyes sparkling with desire as they laser in on my tits.

“Gia!” He acts surprised to see me as if he hasn’t been oglin’ my ass all night. “You look good enough to eat.”

He licks his lips and leans in to whisper in my ear over the loud hip hop music blaring through speakers set up all over the house. “Just say the word, and I’ll eat you out until you beg me to stop. Again.”

I shiver at his words. Jason isn’t my type, but after a little too much booze and blow, he gives head like he was born to do it.

“Maybe later,” I tell him around a fake pout. “If you’re a good boy. Anyone here got any weed? Ro wants a joint.” I lean my elbows on the counter next to the keg and watch as his eyes widen in delight. “So?”

His blue eyes crawl up my body full of heat as he settles on my face. “What’s in it for me?”

I resist the urge to roll my eyes and shrug. “What do you want, Jase?”

“A kiss.” His lips curl into a smile that I think is supposed to be sexy, but it fails.

“With tongue,” he counters.

“Try again.” I smile to take the sting off my words. “No kissing.” It’s not really my jam and definitely not with Jase.

“Let me suck your tits for five minutes.”

“For a joint?” I roll my eyes. “You’d better throw in an eight ball for that.” And even then, I can’t see it happening.

“Tease,” he growls. “How about this? You let me do a shot from your tits, and this joint,” he pulls it from the pocket of his denim jacket to tease me, “is yours.”

I tap my cheek, pretending to think about it, making him wait a little to let his anticipation grow. Jason isn’t the first guy to drool over my tits, not even the only one in the room drooling over them now. They’re just tits, and guys have been making fools of themselves over them since I was a teenager. Now, in my twenties, they’re no big deal to me. I push away from the counter with a grin. “Where’s the salt?”

Jase laughs and hands me the joint. “You remembered my favorite drink. I know you want me, Gia, and I can’t wait for you to stop playing so hard to get and give me some.”