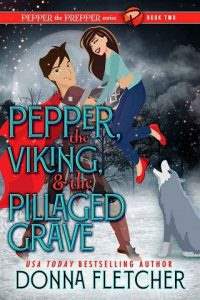 The constant tap on my cheek woke me and I opened my eyes to see Roxie, my calico cat, sitting on my chest. She remained there staring at me. I turned my head already knowing I would find the spot beside me in bed empty and with Mo, my gray and white, Alaskan Malamute, not having his nose in my face, meant only one thing.

“Mo went with Ian after he fed you both, didn’t he?” I asked Roxie and she meowed. “But he forgot your after-breakfast snack, didn’t he?” She meowed again.

I stretched, my usual signal that I’m about to get out of bed, and Roxie jumped off me, though sat on the edge near the bottom ready to remind me in case I failed to obey her command. I turned and took a quick sniff of Ian’s pillow. The man had the most gorgeous scent, and I greedily couldn’t get enough of it. Or maybe it was because I had gone so long without a relationship that I appreciated this new one even more.

I slipped out of bed and into my fluffy slippers and flannel bathrobe, Ian still lingering on my mind. How I got so lucky to fall in love with such a great guy, not to mention he’s also a gorgeous cover model, was still a mystery to me and though I love solving mysteries, this was one that continued to elude me.

“Ian is more than a handsome hunk,” I said to Roxie as she followed me to the kitchen. “He is a good guy with a loving heart.”

Roxie meowed in agreement, though it was more like she was reminding me to get her snack and pronto.

I stopped abruptly when I reached the living room and saw what was outside the many windows of my log cabin. “Snow!”

I hurried to the one set of French doors that flanked my stone fireplace. There was at least an inch on the ground.

I sent Roxie a smile. “Now I remember. Last night Ian and I talked about the forecasted snow, and he planned to get up early and get a few photo shoots done if it did snow.” That explained why Mo went with him so early. He loved the snow and so did I.

I went to the kitchen to turn on the electric tea kettle, a gift from Ian since he drank as much tea as I did, and spotted Ian’s note. I got Roxie’s snack before reading the note or I would suffer the consequences.

Content now that she got what she wanted, I was free to read the note in peace.

Mo is with me. Going to get some shoots done in this beautiful snow. Join me and we’ll have breakfast at the lodge together. I wait impatiently for you.

I chuckled. Like there would be anyone else but him.

I hurried to dress, eager to see Ian. Our relationship was about three months new, and a lot had happened in that short time. Willow Lake Lodge, the sixty acres surrounding my three acres, was believed to be inherited by Ian from his uncle Max, actually belonged to me, inherited through my aunt Effie. We managed to work out an agreement that took into consideration the cost Ian had already put into the lodge and he now leased it from me. He would continue to conduct his modeling business from there for not only book covers but various modeling deals as well. What would be done with the remainder of the land, whether to build on part of it, create a sanctuary on another part—a dream of my aunt Effie’s—open the lake to locals, was entirely up to me. Though, I did discuss it with Ian and endless other people. It was something I didn’t intend to make a quick decision on, and Ian agreed.

I worried at first that it might cause a problem for us, but with both Ian and me loving a good mystery, it helped us solve the issue with little problem. He spent most every night here with me now, though I have spent a couple of nights at his apartment in the lodge, a gorgeous place. But we both agreed we preferred the privacy of my log cabin. Besides, there was Mo and Roxie to consider, though Mo had gotten into the habit of strolling over to the lodge after finding out everyone there was generous with snacks.

I got my boots on, slipped into my parka, grabbed my knit cap and gloves, and headed out the door to see the sheriff’s vehicle coming up my driveway… the sheriff being my father, Warren Madison.

I was surprised to see him, not that it was unusual for him to stop by for coffee in the morning, but with Ian sleeping at my place now, my dad was cautious about stopping by too early. He’d wait until Ian’s vehicle was gone and how does he know when Ian leaves, you ask? It is because I unwisely allowed him access to my outside security cameras after two dead guys were found in the woods on my property, but that’s another story.