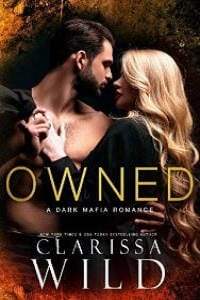 Running from a mobster is the hardest thing I’ve ever done.

I never thought I’d find myself in this situation. That I’d be chasing a lie, wishing the people who raised me really were my parents, and that I hadn’t seen my true father die right in front of me. I wished I could pretend and stay with him, the man who saved me from the people who stole me and raised me as their own … Marcello.

But he lied to me.

He knew the people who took me weren’t my parents, and he never told me. And I can’t ever forget that he chose not to tell me.

So I run. I run like hell because that’s all I can do when faced with the impossible.

The impossible choice between what is right … and what my heart desires.

Because I know, deep down, that I have already fallen for this man.

But this forbidden love is not meant to be.

He used me. Treated me like a pet. Like something he owned. Just because he bought my soul.

But my love is not for sale.

He may have saved me from that fire at my fake parents’ house, but that doesn’t make him any less of a monster.

I refuse to look back over my shoulder even though I know he must be following by now. When I saw him at Andrea’s home, I feared he might find me, so I kept on running and left her there.

So I run until my legs feel heavy, until my lungs are tight, and my vision gets blurry. My energy is fueled by my adrenaline, but that too is running out. I don’t have much strength left to give. It’s paramount that I find shelter soon.

The city has plenty of nooks and crannies to hide in, and when my body is finally ready to give up, I run into an alley and sit down behind a dumpster. It isn’t much in terms of protection, but at least I won’t be spotted from the streets now.

With my back against the wall, I sink down to the ground and suck in deep breaths, one after the other, until my lungs no longer feel constricted and my head no longer feels like it’s going to explode. I’m tired, so tired. I need to find a place to rest.

Where do you go when you have nowhere else to go?

When nothing is safe?

The thought of having to survive out here all by myself makes my skin crawl. I won’t be able to go to any of the places I used to go to because Marcello will be looking for me there.

Despite knowing I shouldn’t be angry with myself, I can’t stop the rage at my own weakness from burning up my core. Because I’m not just upset at the choices I made. I’m upset about everything I’ve lost, everything I learned. I’m angry because of him. Because of everything I’m going to miss about him, about us. Everything that made me feel so damn good.

But a part of me can’t stop longing for his touch, his kiss, his body against mine, and his eyes on me. I loved all of it, and I despise myself for it so much that I have to slap myself.

Stop this, Harper. You know better than that.

I get up from the ground because I need to keep on moving. This is no place to stay. I have to find shelter.

In the dark of night, there aren’t many places to hide. I have no money to stay in a motel, so I opt for the only thing I can think of: an abandoned house on the edge of the city with a wild garden and a shoddy fence about to collapse.

I quickly go inside and close the door behind me, but the cold draft coming in from the holes in the window makes me shiver. Still, the place looks empty. Maybe I can stay here for the night.

I don’t want to be caught trespassing. Then again, I pity anyone who calls this place a home.

“Hello?” I yell again up the staircase, which is missing a few steps. I don’t dare to go up, not without a light anyway. The only light coming into this house right now is the moonlight. But it’ll have to do.

I go into what appears to be the kitchen and have a look inside the cupboards. They’re empty, bar some old pans and dishes no one seems to have used for years. Spiders and cobwebs inhabit every corner, and when I slide my finger across the table, it’s covered in dust.