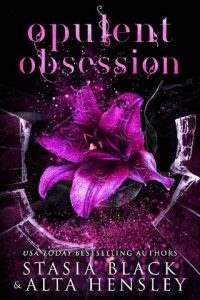 THE ORDER OF THE SILVER GHOST

Requests the honor of your presence

As we prepare for the celebration of The Trials of Initiation

SATURDAY THE TENTH OF MAY

At half past Midnight

Just because he was dead, didn’t mean he was gone.

We were all haunted.

As I stood in my brother’s room, staring at his shiny trophies, his awards framed and on display, and not a single speck of dust to be found, I realized how alive he truly was.

Frankly… more alive than I was.

Years had gone by, and the room hadn’t changed one bit. I could still smell him, feel him, and practically hear his good-natured laugh. But no matter how hard I listened, I couldn’t hear him answer my questions. When I most needed the ghost of my brother to haunt my ass, the bastard remained mute. I needed the answer…

How was I supposed to endure 109 days in the Oleander going through the Trials that were meant for him to complete?

I was the imposter, and yet, here I was with the invitation in my hand, and hours from beginning the Initiation. The Order of the Silver Ghost was his birthright, not mine. Firstborn, not the second—and often forgotten—Jackson son. But here I was, filling his shoes whether I wanted to or not. It was now my duty, my task, my curse.

“What are you doing in here?” my mother asked from behind me. Panic laced her words, and I knew she hated I was in his room.

I spun to face her, noticing how her eyes scanned every inch of space to see if I moved anything. God forbid I alter a single item. “I came by to say goodbye.”

“Goodbye? Where are you going?”

“The Trials start tonight,” I said with forced patience, trying to not snap at the woman who had nearly climbed into the same grave with her son and died with him. “I’ll be out of contact for 109 days.”

Her eyes seemed to fog over as she focused on a picture of Timothy after graduation in cap and gown. “That’s right,” she mumbled. “Your brother had always been excited for this day.”

“Remember how he would go to the Oleander with your father every chance he could?”

I nodded, remembering how I got to tag along most times even though I wasn’t ever going to be a member of the Order. It’s when I met my best friends. Even though they were all firstborn and would eventually go through their own Trials, they never treated me differently. I was one of them in all ways that mattered. Had any of us known sick fate would change all that for me, and indeed I would become one of them… well…

She walked over to Timothy’s desk and touched a cup of pens and asked, “You didn’t touch anything in here, did you? You didn’t take anything, right?”

“I didn’t move a thing,” I said as I watched how she inspected every single item just to be certain it was exactly how it had been before he died.

Minus the dirty clothes that had been in the hamper, not a single item had been taken away or given to charity, or God forbid… given to his grieving brother as an item to remember him by. I had to sneak into his room to get that feeling of closeness. When I had asked for my brother’s football jersey to remember him by, I still remember how it had nearly given my mother a stroke. Nothing… nothing, would leave this room.

She darted her eyes—drowning in disgust—to my arms that were fully covered in tattoos. I instantly regretted wearing a short-sleeve shirt. “I hope you plan to keep those covered. Your father would be embarrassed to have the Elders see all that… those markings all over you.”

“I’ll be wearing a tuxedo, Mom.” I wanted to roll my eyes, but instead I leaned in and kissed her cheek which felt cool and lifeless. “I’ll keep them covered. Don’t worry.”

“I don’t know why you would do that to your body,” she lectured for the hundredth time. “It makes no sense at all. Your brother didn’t feel the need to destroy his skin.”

I took a step toward the door, desperately needing to get out of my brother’s tomb. My mother spun around and continued to scrutinize me.

“And that tattoo on your chest,” she continued. “I can see it peeking out of your shirt. You really have to be careful and hide all that… ink.”