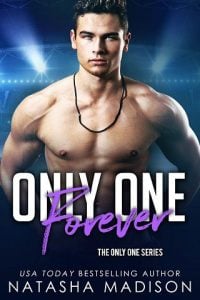 I sit on the bench, catching my breath after my last shift on the ice, but my eyes never leave the puck. We’re all exhausted—triple overtime with over one hundred minutes on the ice—but our back is to the wall. If we lose this game, we are out of the playoffs. My whole body feels like it’s one big ball of nerves. There is so much I want to do on the ice, but I can’t do anything. The roar of twenty-two thousand people makes it almost deafening, the white towels flinging into the air as they chant, ole ole ole ole.

The first round in the playoffs is interesting, to say the least. Everyone wants to win the games, but what no one points out is playoff hockey is on a whole other level. You can’t just go out there and play like it’s just another game because it’s not. Everyone is ready to battle to hoist that Stanley Cup over their head. It’s every single player’s dream.

I can see the play happen in my head before it plays out right in front of my eyes. The trip-up in the neutral zone. The tape-to-tape pass, and then the defenseman is sliding in front of the shot and taking it to the net. It’s almost like in slow motion as the puck flies over my goalie. The red light behind the goal illuminates, and all I can do is look down at my skates. The echoing of my heartbeats in my chest as the bench beside me empties, and all I can do is look down the ice at the other team celebrating. “Motherfucker,” I say, defeated, and then the feeling of anger fills me. Every fucking year it’s the same fucking thing. I also know that there is at least one camera that is pointed at me, waiting for my reaction.

Someone slaps my shoulder, and I throw my legs over the bench to get up and skate on the ice toward the goalie. Putting my helmet to his. “Nothing you can do, buddy. We let you down,” I say even though, if truth be told, everyone is to blame with this one. Up by three and the lead gets blown again for the second game in a row. Losing in your building has to be the worst feeling that you can ever have. The boos sound, the brooms being thrown on the ice because we just got swept by the last-place team. The. Last. Place. Team.

I skate to the middle of the ice as we line up to congratulate the other team. I don’t even know what is being said because all I can hear in my head is what the announcer is going to say.

Montreal blows another lead to be swept in the playoffs. For yet another year.

I skate to the middle of the ice for the last time this season and hold up my stick to thank the fans for coming. At the same time, I silently tell them I’m sorry for letting them down. Skating back to the bench, I walk back into our locker room. No one says anything as they sit down and undress. So much is going through my mind on my end, but the only thing that sticks out is disappointment in myself. In my game. In my team. In fucking everything.

“Dylan,” the coach says, and my head lifts up to look at him. “You’re up for interviews.”

I shake my head, knowing the shitstorm that will come my way. I slip out of my gear, grabbing my sport shorts and a T-shirt. “I’m not going out there alone.” I look at the coach. “If I do, I’m not going to be diplomatic about anything, and I’ll take one question.”

I think he can see from my demeanor and my tone that I’m not fucking around, not tonight. He just nods at me. “Leo,” he calls my assistant captain, who looks like he was crying. “Get out there with him.”

“Why the fuck do we have to give interviews after losing a series?” He stands up, asking exactly what I was thinking. “Like what can we possibly say?” He puts on his shorts and a hoodie, putting the hood up. “Does this say don’t fuck with me?” he asks me as we walk toward the press room.

I shake my head, and a soft smile comes out. “Definitely looks thug life.” I turn and walk into the press room. The long table has a black tablecloth over it with the backdrop of “Stanley Cup Playoffs” all over it, mocking me.

Ten reporters are sitting there. Some are with notepads but most with their phone in their hand as they wait for us. I don’t make any eye contact as I sit in the chair next to Leo.

The first question is for me. “Dylan,” the guy says, and I put one elbow on the table while one holds my chin. “I don’t know how to ask this,” he says, and I’m already irritated. “What happened? You had full control of the whole game, and you guys lose it in the last minute of the third period.”