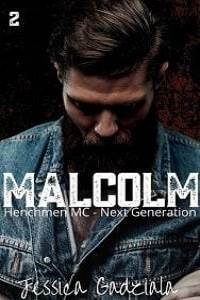 "No way. I think he would sing something truly sappy," Billie, declared from the small backseat of my pick-up where she was crammed next to Gracie and Willa. Hope was in the seat beside me, texting at a rapid-fire pace. Work. It was always work with Hope. Even on a night out with the girls.

"I don't think Malc even knows the definition of sappy," Hope shot back, flipping her phone over on her lap like not seeing the screen might reduce the temptation to keep checking it. "I can see him doing some Mumford & Sons. Country-rock crap."

"Maybe we would know what he liked if he actually played some music when he drives," Willa said pointedly, shooting me a raised-brow look in the rearview.

"Newsflash, Malc, there is nothing quiet about this car ride," Hope reminded me, smirking.

That wasn't untrue. And it would only get louder after I dropped them off to get drunk. When they all climbed back into the car later, there would be a lot of shrieking noises and laughter.

They were trying to decide what I would sing if I joined them for their weekly karaoke night. Which, of course, was nothing. Since that would never fucking happen. Not even if they enacted Billie's plan to get me "annihilated." The plan included two bottles of whiskey because, apparently, I had a "troll's tolerance to alcohol." Whatever the hell that meant.

Billie spouted off weird shit like that all the time that went over my head. You can't make that decision when Mercury is in retrograde, Hope. Or If you don't ground yourself, Willa, all that capitalistic toxicity in your workplace is going to make you deeply unhappy. Or Never tell a wish to a stranger. Or Don't trust your ears tonight, the veil is thin. My favorite, though, was when she'd handed me a blue gemstone and declared This is lapis lazuli. It will help open up your throat chakra if you keep it with you.

I didn't believe in that shit, but I kept that gemstone in my center console anyway.

"I can see him getting all twangy to some Hank Williams," Willa declared. "I can even see him playing a guitar."

"How do you know? None of us knows what he does all alone in those woods all the time," Willa reminded them.

It was a bone of contention with the girls that I never let anyone come to my place. Normally, just saying they weren't welcome wouldn't actually deter them. The only thing that kept them from my doorstep was the fact that no one actually knew where my place was. That was a perk to living out in the middle of nowhere.

It wasn't like I didn't want to spend time with them. I loved my not-by-blood cousins. We'd all grown up together. We were tight.

But I shared a lot of my life. With my club brothers where I never got any privacy. With my parents, my aunts and uncles. We were all a tight group. We spent a lot of time together. And there was no such thing as privacy. Or quiet.

So I liked having one thing in my life, one place in the world, that was just for me. Where I could get away from all the noise and get some peace.

Just me and the dogs.

"I don't play guitar," I told them, shaking my head. "You're thinking of Bennet," I reminded them. His father, Cyrus—one of our uncles— had always played. He'd passed on the passion.

"I think he collects model trains up in the woods," Willa decided. "That's why he doesn't want us to visit."

"Or maybe it is little glass unicorns," Hope piled on.

"You're not helping," I grumbled at her.

"I'm not known for it," she shot back, smiling.

"Are you guys inviting anyone else out tonight?" I asked. "Truck is at capacity."

"Oh," Billie started, leaning between the seat, her deep mauve hair brushing my arm. "Unless Rowe is free tonight," she told me, batting her eyes. "Then we can find somebody to come. And he could drive us home. Well, drive me home."

"Give it up on Rowe already," Hope said with a sigh, elbowing Billie back into her seat.

It was no secret that Billie, for who knew what reason, had a thing for my best friend. Always had, since he rolled into town in my senior year of high school, and we got close. Why, I had no idea. Billie could have any guy she set her sites on. Everyone except Rowe who wouldn't even look twice at her.

Maybe that was it for her. The thrill of trying to get what she couldn't have.

As a general rule, to discourage hard feelings between my best friend and a girl I saw like a sister, I kept them apart as much as possible. The problem lately was, Rowe was prospecting. Which meant it would be difficult—if not outright impossible—to keep the two of them from bumping into each other.