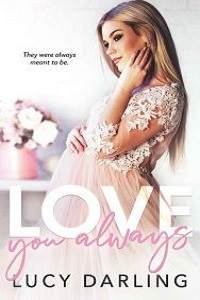 This book includes all five stories from the Love Series! Love on the Line, Love Forever, Love in the Mix, Love Undefeated and the NEVER RELEASED BEFORE Love You Always. You asked for Kim's and Kent's story. Now it's all yours.

This series is full of all the tropes you love. You’ll get happily ever afters, no cheating, and sugary-sweet alphas that love to get on their knees.

Just when I thought I had it all, Kimmy Kennedy falls right into my lap and makes me realize my life is empty, because all this time it’s been missing her.

I knew it would be a fight to have her. She is young, beautiful, and full of life that she only just began. That isn’t the only problem. She's also my best friend’s little sister.

When our spark ignites far brighter than we could’ve ever known, it brings attention. She wants to keep us a secret. I want the world to know she's mine.

There’s no hiding the fact that I want her with a desperate need I can't ignore. She’s all mine, and nothing and no one will ever change that. Not her or her brother.

Love on the Line

“Sir.” I open one eye at the sound of Mark’s voice. Boredom has gotten the best of me this afternoon. There is nothing to do. I need a new project. I can tell by Mark’s tone that he’s irritated. Not only that, he wouldn't bother me while I tried to steal a nap in my office unless something was wrong. He’s trying to hide his irritation but I know him better than that. He’s worked at my side for over five years now and I can easily read him. Only one person gets under my executive assistant’s skin and that’s my sister, Kim. She’s the only other person besides me that he can’t boss around. “She’s being crazy.”

I open both eyes knowing I’m not going to get any rest now. I shoot him a look.

“Sorry, not crazy but irrational?” he tries again.

I drop my feet down from my desk, sitting up. I’m not a big fan of anyone calling my sister names. Even though I know she can be both crazy and irrational at times. It’s not as though he’s telling me anything new, but I don’t take kindly to others putting her down.

“Watch it,” I warn him, hitting my mouse so my computer comes on to check the time.

“Sir,” Mark tries again. She must have really done something outrageous now to have him so flustered.

“What did the little brat do now?” I ask, seeing it’s only one in the afternoon. This day is never going to end. I’m allowed to call my sister names. I’ve had to deal with her meddling for my entire life, so she’s earned the nicknames I call her. I’m sure she has done something crazy. When she doesn't get her way she often makes life interesting. I hope whatever stunt she’s pulled this time is at least entertaining. Most of her shenanigans are at my expense, which is probably what has Mark in his current state.

“She put a million dollar debt into a collection agency against you!” he half shouts. I almost laugh but I think Mark will have a breakdown if I do. I’m not surprised. Kim, that little brat, actually did it.

“Who cares?” She is trying to get a rise out of me. It’s not working. She can send me to a hundred collection agencies and I’m still not going on a fucking date of her choosing. I’ll pay a million dollars to not go on a date with whoever it is she’s trying to set me up with.

“It’s on your credit. She claims that you spent a million dollars at Kimmy’s Lingerie.”

“She’s really starting that company?” Damn. Good for her. I’m proud that she's doing it. I need to do something to keep me busy. Kim has two little ones underfoot and is now starting the lingerie company she’s been talking about since she graduated college. She didn’t bank on getting knocked up and married so quick. I didn't count on my best friend being the fucker that did it either. I’d seen it coming though. He is a shitty friend for sleeping with my sister but he is also a great father and husband. I know he loves her. The smile that’s always on my sister’s face tells me that she’s happy. This happiness I speak of has also led her to try to play matchmaker with me.

“I tried to call and reason with her.”

“How’d that go for you?” His jaw ticks. I know the feeling. This doesn’t even bother me. What bothers me is the trick double dates or set-ups in general. This is child's play compared to her usual antics.

“Not well.” He straightens his tie. “Will you please call her?”