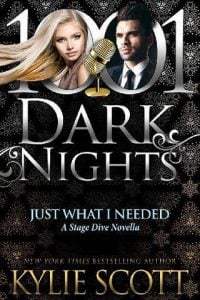 When the Stage Dive crew decides to help, they do it in a big way.

Nanny and housekeeper Jude has been going through a dry patch. Getting ready to dip her toes back into the dating pool is a little nerve racking. And the offers of assistance from her boss, David Ferris, and his band are not helping. Right up until music producer Dean Jennings arrives to work on the band's latest album.

But Dean is more than a little wary of dating anyone with anything to do with the Stage Dive crew after losing Lena to lead singer Jimmy Ferris all those years ago. Can Jude a) Convince the crew to stay out of her business and b) Woo the man of her dreams?

**Every 1001 Dark Nights novella is a standalone story. For new readers, it’s an introduction to an author’s world. And for fans, it’s a bonus book in the author’s series. We hope you'll enjoy each one as much as we do.**

and I had read that by the time he met Scheherazade,

There are reasons why people with careers like mine don’t tend to date. Most notably, when the hell would we find the time and energy?

I regularly chase after a small child up to six days a week. It depends on what’s going on with the family. My day usually starts at eight despite Jameson waking at around six or so. And it finishes at different hours depending on what’s happening. Some celebrity parents want a nanny to be available twenty-four seven. Some would even basically like you to raise the child in question.

Once, for instance, I was offered a job living in an apartment with two children under the age of two while the parents occupied a mansion nearby. Their plan was to drop by once a day, time permitting, to visit with their kids.

I declined that one.

But the people I work for currently, David Ferris (from the world-famous rock band Stage Dive) and his wife Evelyn, are more hands-on. Which is great. And more importantly, they enjoy waking with their son, allowing me to keep my sacred morning rituals intact.

The truth is, I don’t want to start work any earlier than eight. I hate having to fake being a morning person. It’s rude and wrong and shouldn’t be allowed. Both my faith in humanity and ability to get things done is vastly improved after two coffees and a long, hot shower. With emphasis on the words long and hot. The move from L.A. to Portland has been great. I enjoy being back in my hometown. What I do not love, however, is the weather. And November in Oregon is colder than I remember. Guess I got soft down in California. But the coldness—and the constant chasing after a toddler—has seemed to contribute to my sex life.