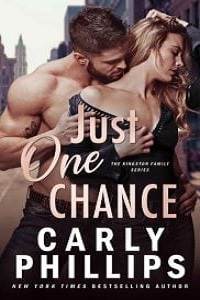 Xander Kingston woke to the sound of voices in his backyard. His gated, locked pool area and the retreat he valued for its privacy. What day was it again? He’d been up late writing. Tuesday, he remembered. And no good reason for him to be awake yet.

With a groan, he tossed the covers and walked to the sliding glass doors off the family room, pulling on a pair of boxer briefs on the way—but not bothering with pants or shorts. If the overgrown idiots in his pool were going to interrupt his solitude, they could suck up the view.

His golden retriever, Bella, rose at the same time he did, and Xander paused to pet her on the head. “Hang on, girl. Let me just take care of something and we’ll go for a run.”

He opened the door and stepped onto the pool deck, letting Bella rush past the pool to the grass where she did her business.

“Hey! Go home to your place,” Xander shouted at his company.

As he’d expected, his brother Dash and the other members of the Original Kings, an award-winning rock band, loved and beloved around the world, were hanging outside. For Xander, who’d been up late working on his latest thriller, he couldn’t claim the same adoration. Especially since Dash had an equally huge house with a pool and the same amount of privacy a mile down the road.

“We needed a change of scenery to help unlock the muse,” Jagger, the lead guitarist, called from his lounger in the pool.

“Sorry, man. Didn’t mean to wake you,” Dash said. “I just had an idea and had to sing it out to the boys. Listen.” He picked up his guitar and played a riff while belting out an accompanying chorus.

Xander had to admit it was catchy. It also could have happened at Dash’s house.

“I like it. I’m feeling the beat,” Mac, the bass player, said, his hands moving in the air as if he were strumming his instrument.

The guys shot each other a look but no one answered.

Xander shook his head. The band wasn’t his problem. At least today’s visit didn’t involve groupies and alcohol. “I hope you brought your own towels,” he muttered, stepping back inside.

He quickly pulled on running shorts, a tank, and socks then laced up his sneakers. After washing up and taking care of things in the bathroom, he headed to the kitchen to find his brother pouring a glass of orange juice, Xander’s morning favorite. He’d already made himself a cup of iced tea.

“Where are the guys?” Xander asked before picking up his drink and swallowing it quickly because he was thirsty. Bella obviously felt the same way, because she lapped at her water, the sound loud in the kitchen.

Dash gestured with his thumb. “They went back to my place.” He took a sip of his drink. “So what crawled up your ass this morning?”

“I was up late.” He leaned against the counter and glanced at his brother. “I didn’t set an alarm and I didn’t expect be woken up by you and the band.”

“Didn’t like being serenaded, huh?” Dash laughed. “Sorry. But you of all people know sometimes a change of scenery helps the creative process.”

“And sometimes you show up because you’d just rather I be the one left with the clean-up.” His brother was incorrigible. Xander supposed it came from their mother allowing Dash to cultivate his artistic talent instead of adhering to structure and rules.

Dash didn’t deny it. “Hey, we still on for the family barbeque?”

“Yeah. Here on Saturday night.” Normally their get-togethers were on Sundays, but since Xander’s movie began filming in the city on Monday, he’d switched up the day.

Xander’s family were a tight group, cared about what was going on in everyone else’s lives, and made it a point to get together often. Linc, the oldest, liked to think he’d taken over the paternal role since their cheating father had been emotionally absent, but the three Kingston brothers, their sister, Chloe, and newly found half sister, Aurora, looked out for each other. Always.

Xander pushed himself off the counter. “I’m going for a run. You sticking around?”

Dash shook his head. “Nah. I think I’ll head back to the guys. See what we can make work in the studio.”

Before Xander could reply, his cell rang and he grabbed it from his pocket. His agent’s name flashed on the screen. “Raye,” he mouthed to his brother.

Raye Douglas, partner at Douglas Talent Management Group, had represented Xander ever since Dash had convinced his manager there to ask the best literary agent to read Xander’s manuscript five years ago. Raye, the daughter of the top agent at the firm, had been curious, poached the script from her dad, and she’d been impressed.

Xander had been equally taken by her unwillingness to settle or take no for an answer. She’d pushed hard for him, and Xander had ended up in a bidding war that culminated in both publishing and movie rights being sold, making him a proverbial overnight success. After a grueling four years in the Marines, that is.