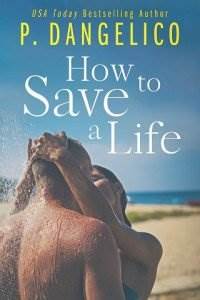 The voice reaches me in the fog. Some of it tequila induced. Some grief. All of it beyond my control. It sounds like my father, but it can’t be him. Dad’s in the Keys deep-sea fishing with Beau, so it must be another fog-induced delusion. I’ve had plenty of those in the last few weeks.

“Jordan,” I hear again. More forceful and clear this time, projecting from the threshold of my bedroom door. Hovering over me, bearing down on me.

“Jordan?” comes again. It’s about as welcome as sand between the back of my teeth.

“Who let you in?” I say into the pillow, my voice cracking from disuse.

How long have I been in this state? A few days. Maybe more. I’ve lost all concept of time. It’s irrelevant now, only serving as a constant reminder of what happened. Inertia got a hold of me that day and life as I know it stopped. It didn’t cease to exist. It just stopped in that one awful fucking moment, leaving me forever trapped there.

The old man has always been a blunt talker and honest to a fault. I used to love that about him.

“Remind me to change it when you leave.”

His feet shuffle across the carpet, the brushing sound like sandpaper to my already injured nerves. I bury my head deeper under the pillow but it’s useless. There’s no getting away, no more hiding. The button activating the shades beeps and sunlight invades my bedroom. It hits the bare skin on my back and makes me recoil. Everything hurts right now. Simply existing hurts. Taking a deep breath hurts.

“Your brother tried calling you.”

Yeah, I know. I had to block him after the twenty-fifth call.

“How much longer you plan on doing this?” he continues after a heavy beat.

How long does it take for a life to end if I will it? How long until I fade away? Quietly. Without drama. Stop looking for me, I want to tell him. Stop trying to save me. But the words won’t come out. Something stops them. Some feeling just out of reach.

I close my eyes and I’m on a foggy beach, a girl calling to me. Lainey, maybe. I’m not sure. I can’t see her face. But she keeps calling my name. And she sounds happy. She sounds so damn happy I want to go to her. It’s all I want.

“Aren’t you supposed to be in the Keys?” I say squinting into the sun, the outline of my father’s broad frame blotting out most of it in an act of mercy.

“Your mother is worried. She said if you don’t get an assistant, she’ll get one for you.”

My mother––the control junkie. There’s no changing her. I used to tell Beau to learn to live with it. My words keep getting thrown back in my face. Life has a funny way of doing that. If I ever survive this, I need to put a stop to her bullshit.

“You’re divorced. Start acting like it.” I dig my fingers into my eye sockets. My head pounding with a nasty case of drinker’s remorse and a cruel case of a bright sunny day in the dead of winter.

“She’s my best friend. We got a divorce so we could stay that way.”

The mention of a best friend is a gut punch, my stomach turning over and over.

My best friend is gone.

I’m never going to see or hear from her again. Only in the fog. The fog is my ally, the fix I need to get from one day to the next. The only thing that keeps the pain from running roughshod over me.

“I know you’re hurting, but this…”––he looks around––“you can’t let it take you down. It doesn’t do anybody any good.”

John West, a shrink by trade, rarely counsels his own family. This is his way of telling me he’s worried.

“I’m fine, Dad. You can go back to your boat,” I manage with semi-believable conviction.

The old man responds with a long-held sigh and stuffs his hands, callused by years of wrestling tuna and marlin, into his pockets.

“You win,” I say, sitting up, resigned that he won’t go away until I make an effort to appease him.

I run a hand over my jaw, discover the full beard covering my face. I guess more than a few days has passed. Bottles litter my bedroom floor, which explain how that time was spent. That was never in doubt. The only way I can bear life right now is in a state of deep intoxication. Drowning in oblivion. I wish he would leave so I can get back to it.

“I’m alive. You can tell Congresswoman West to call off the search party.”

“Get dressed,” Dad says as he heads for the door. “I’ll take you to lunch.”

The image of his flannel covered back and wrinkled khakis is so damn familiar and comforting the grief goes into remission for a minute. Only for a minute though.