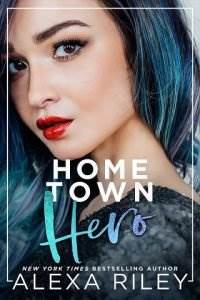 I stare up at the ceiling, unable to fall asleep. I’ve been tossing and turning for the past hour and it’s all his fault. Cooper Cross is my best friend's older brother, and he’s invaded too many of my thoughts since he came back to town. Now he’s invading my dreams, and there’s no escaping him.

When I moved back to the small town of Pink Springs, Lux and I became best friends instantly. I was so sure I was going to hate it here because it was so isolated. Before moving to the middle of nowhere I bounced between boarding schools and the city. Both of my parents were high-powered attorneys and the life they had was fast-paced. I was pushed into school early in life, and there wasn’t time to get to know them before everything changed.

In the blink of an eye they were gone, and even now it’s hard to believe they died together in a plane crash. It took a while for me to come to terms with it, and Lux helped. When I showed up in Pink Springs to live with my grandmother, she shined light into my dark world. Now I’ve been doing the same for her since she lost her father.

I close my eyes when I hear the bedroom door open. My heart begins to race in my chest because I know it’s Cooper. He is the only other person in this house besides Lux, and she’s fast asleep next to me. Luca is out tonight, which is typical for him.

I’d never met Cooper until recently when he came back home after their dad passed away. He came back with the specific purpose to look after Lux, and now he’s the town sheriff, and everyone adores him. I had a crush on him before he even knew I existed. I saw photos of him around the house years ago when Lux invited me over for the first time.

I thought he was the handsomest man I’d ever seen until I came face to face with him. Somehow he was hotter in person and was much bigger than his older pictures. I suppose being a SEAL could do that to anyone, but Cooper is insane to look at.

After a long moment, I hear the door close again, and I kick off the covers. As quietly as I can, I sit up on the side of the bed. Cooper is going to lose his mind when he finds out what Lux has planned tomorrow, and to be honest, I’m kind of losing my mind over it too.

I know she’s only moving a few hours away, but it’s going to be hard not having her around all the time. She tried to get me to go to the city with her, but I left that life behind. Once I’d gotten to Pink Springs, my eyes were opened to a whole new world, one that I want for the long haul.

People here generally care about each other, and family actually means something in this town. It makes me long for a family of my own, but the problem is my crush on the town sheriff isn’t helping me to make that dream come true. Not to mention because I’m Lux’s best friend I’m included in the blanket rule in town to keep the opposite sex away from us. Her two brothers are not messing around when it comes to her, and that’s something else I’ve always longed for. Someone to truly look after me.

When I get out of bed, I make my way quietly to the kitchen. Once I’m there, I grab a glass of water and lean up against the counter as I gulp it down. It’s going to be strange not coming over here all the time because Lux and I are pretty much inseparable. I suppose if it gets too hard I could follow after her. It’s not like anything here is holding me back except myself.

The lights in the kitchen flicker on, and the glass drops out of my hand from surprise. The shatter isn’t loud, but glass goes everywhere, and I stand there frozen. Cooper is across from me, wearing nothing but a pair of gray sweatpants. Every inch of him is on display, and I’m seeing tattoos I didn’t know he had.

I’m not sure I could if I tried because I’m still in shock. Cooper and I don’t really talk much. He comes into the diner where I work a lot, so I hear him talk to others. But in all that time I’ve never heard him talk like that before.

“I’m sorry,” I say when he comes back with a broom.

He props the broom against the counter, and his hands go to my hips. He lifts me off my feet, and I bite the inside of my cheek as his strong hands grip me. He places me on the kitchen counter and barks another order for me not to move as he silently cleans up the glass.