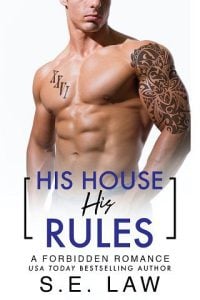 I’m in the middle of working out in my home gym when my intercom buzzes. I haven’t been expecting visitors, so it’s fucking annoying. Who’s the asshole bugging me on my day off? I head to the kitchen where the intercom’s situated and jam my finger on the button.

I can hear the surprise in Vince’s voice because he knows I live alone upstairs. Nonetheless, I groan internally. Selena is my kin, even if we don’t see each other much. She’s not exactly my daughter per se. She’s the daughter of my deceased wife, so not biologically mine. But after Rochelle’s death in a tragic car accident shortly after our marriage, I was left with a ten year old child on my hands.

At first, life was a blur. Both Selena and I were devastated about her mother’s passing, and we were just trying to get from one day to the next. Even more, Rochelle’s accident happened mere months after our wedding and I had zero experience when it came to dealing with children, much less grieving ones. Platitudes like “I’m sorry” and “things will be fine” never seemed to cut it (how could they, given the circumstances?), and Selena drew further and further into her shell like a pale, silent waif. I don’t blame her for retreating from the world, which must have seemed awful and full of bad things. She was only ten at the time, after all.

But eventually, we had to do something, so I packed her off to boarding school. Selena was at Le Maitre for seven or eight years, and then I paid for college, after which my stepdaughter got a job somewhere. To be honest, I don’t know where because we don’t talk much, other than the occasional stilted phone call. But now, it seems my long-lost stepdaughter has turned up on my doorstep and I have an obligation to let her in.

“Send her up,” I growl, “But can you tell her to wait in the living room? I just worked out so I’m filthy and need to hop in the shower. I’ll just be a few minutes.”

Vince still sounds surprised but his voice crackles immediately over the line.

Fuck, this is bad timing. I’m drenched in sweat, and this is no way to greet a guest, even an unwelcome one. With a grimace, I turn the latch on the front door so it’s unlocked, and then stride to the master bedroom for a shower. The hot water feels great on my sore muscles and the steamy environment calms me somewhat. But I can’t stay in here forever. I have to face this unexpected guest, and reluctantly, I stop the water and step out.

As I dress, I wonder what could possibly have brought Selena to my doorstep. She’s never seemed to want much to do with me. During our phone calls, which I always initiated, the girl was generally reserved and even taciturn. Did she resent me for putting her in boarding school? For keeping my distance all these years? Surely, she must realize that as an adult male, it was inappropriate to host a young woman at my apartment. I had to let her go.

But who knows? Maybe Selena is resentful. Or maybe she doesn’t care at all, and merely wants money. I reprimand myself. Just because a lot of people want me for my money doesn’t mean that Selena’s the same. Goddamnit, I’m already thinking too much.

With another huge sigh, I don track pants and a casual t-shirt. Hopefully we’ll be able to resolve this in half an hour or so, and then I can send her packing with a wad of cash in hand.

Running a palm through my short hair, I check my reflection. Yep, the black strands are mostly in place, and my blue eyes are sharp. Then, I head down to the front room to see what my long-lost stepdaughter wants.

When I step into the living room, I look around. There’s no one here and the area’s startlingly silent. What the fuck? Where is Selena? But then the sound of running water sounds from my guest bathroom, and suddenly, the door opens and a figure appears. The air in my lungs completely evaporates because this is no shy, pale child. Instead, this is a gorgeous, full-figured woman who’s jaw-droppingly beautiful with curly brown hair and soft chocolate eyes.

“Hi Clancy,” she says in a melodious voice. “Remember me?”

“Selena?” I manage in a squeaky tone before clearing my throat awkwardly.

“Yeah,” she laughs, sitting down on the couch. “It’s been a while.”

More than a while, in fact. I think the last time I saw Selena was at her high school graduation, and back then, she was a scrawny beanpole with thick glasses and acne. But now, she’s plush and luscious in a loose-fitting blouse that hints at generous cleavage, tight blue jeans, and creamy skin. Fuck fuck fuck. This is my stepdaughter? She looks mature, and every bit a sexy woman.