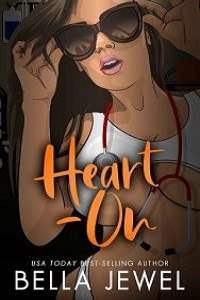 I stare at the man in the bed, sound asleep, bound arms wrapped around not one, not two, but three women. They’re all snuggled into him like he’s a god damned king, and he’s sleeping with not a care in the world.

“Just nope,” I murmur again, crossing my arms, contemplating what my next move is going to be.

I’ve let him sleep in.

I let him go to bed last night without a dressing change. Mostly because he was being a real dick to me, and I didn’t really care in that moment if his flesh started to rot during the night.

I let him ride those women like the god damned warrior he is.

My job as his nurse.

I’m starting to question why I went down this path to begin with.

Why didn’t I consider other options? Maybe a vet. Animals don’t talk back and they’re almost always cute.

I grit my teeth.

“Why me?” I say to myself and then step into the room, raise the airhorn in my hand, and press the button.

The sound fills the room, and a loud shrill can be heard as the women launch out of the bed, arms and legs flying everywhere, frantically looking around as they try to get their bearings. It’s a rather amusing sight, if I do say so myself.

If they want to all sleep with the same man, then they can put up with everything that comes with it.

“Rise and shine,” I call, a huge grin on my face as my eyes swing to Adan, who is sitting up, eyes wide, clearly trying to work out what the hell just happened. “It’s time for bandage change.”

“What the hell?” he growls. “What the fuck is wrong with you?”

“Where to begin,” I murmur to myself. “First and foremost, I need to change your bandages because if I don’t and you get an infection, that’s on me. I let your dickiness fly last night, but now it’s my turn to do my job.”

“You could have fuckin’ woken me up properly.”

“I wasn’t going anywhere near your bed. I can only imagine the amount of fanny juice getting around on your sheets right now.”

One of the girls, a beautiful blond, curls her lip up in disgust as she stands there, clearly awake now, hands on her hips. She’s naked. And she seemingly does not care about this.

What does he tell them when they’re with him?

I was with him once, and once only, and let me tell you the man knew how to work his fingers. I never had the pleasure of trying his dick, but I’m certain it’s as good as the rest of him. Hence why he has three women in his bed. One clearly isn’t enough.

“I’m his nurse,” I say to the girl before Adan can answer. “And I’m here to clean his bandages.”

She looks to Adan, shock on her face. “Are you hurt, honey?”

Sweet mother of god. Is she blind? Stupid? I don’t understand. She just spent an entire night with him and she didn’t notice his bound hands?

“Please tell me you actually paid attention to the fact that both of his hands are completely unusable. I’m sure the man is incredibly skilled with his penis, but nobody is that dumb.”

“Who are you anyway?” she snaps at me.

“I already answered that. Now, unless you want to clean his wounds, then it’s time for you to leave. I’ll show you the door. You do know what a door is, don’t you?”

The other two girls, who are seemingly oblivious as they get dressed, stare at their phones, get up, and walk out without so much as a glance back at Adan. The blond has other plans, and it’s clear within seconds she thinks she’s more than a one-night stand.

She probably hasn’t learned yet, but nobody is more than a one-night stand to Adan.

“Would you like me to stay?” she asks Adan, sitting on the side of the bed.

“No,” he answers swiftly.

“Ta-ta,” I say cheerfully as she walks out the door.

When she’s gone, Adan gets out of the bed, fully naked. Because of the fact that I wash him twice a day, he no longer has any problem getting around naked. He figures if I have seen it once, then that’s that and he can now throw it around like we’re a married couple.

Which we certainly are not.

“If you ever let an air horn off in my room again,” he says, walking toward the bathroom, perfect backside on display, “I’ll shove it up your ass.”

I smother a laugh as I pick up my first-aid kit off the ground and follow him into the bathroom.