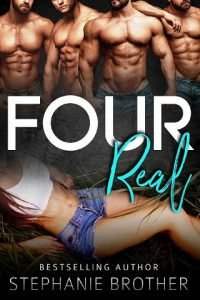 “Happy Birthday, Bianca!” Mom sets a plate in front of me, and I don’t even have to look to know that it contains a stack of flower-shaped pancakes, the same breakfast I’ve had for every birthday that I can remember.

I used to love them, but over the past few years they’ve become a reminder that nothing in my life changes.

I’m still sleeping in the same bedroom I’ve been in my entire life, living with my parents in the same small island town, and working in my family’s store, which is right next door to our house.

Worse than all of that, I’m 24 and have never been kissed.

Well, that’s not strictly true. A boy kissed me in elementary school, but that doesn’t count. I’ve never had a real boyfriend, I’ve only been on a couple of dates, and I really have no romantic prospects whatsoever.

My life is going nowhere.

“How’s my birthday girl?” Dad gives me a quick side hug before he sits down across from me, and I put on a smile for him, though it feels very half-hearted.

“Any big plans for today? Will you be hanging out with Olivia?”

“Yeah.” I nod before taking a bite of pancake. I will be seeing Olivia. Later.

“Are we still on for golf on Sunday?” he asks, tipping a spoonful of sugar into his coffee.

“Of course,” I say, nodding again.

“I can’t get over how much your game has improved.” He looks over at my mom, who’s bringing a plate of regular pancakes to him. “You should see her swing. She’s a natural.”

“I’m really not.” My dad has no idea how much practice time I’ve put in, much less the real reason for all of the practice time.

“Let’s just say I won’t be playing you for money,” he says with a laugh.

The back door opens abruptly and my sister comes in. Lacy’s not usually a morning person, but she looks especially bright and cheery today.

“Good morning, everyone! Happy birthday, B!” She sets a fancy iced coffee drink next to my plate. “I brought a treat for you.”

“Thank you. It looks delicious, but what are you doing here? I thought you were at Nathan’s?”

“I was. I’m working in the shop today so you can have the day off.”

“Oh, I didn’t realize…” Technically, Lacy still lives here, too, in an apartment over the garage, but she’s here less and less, spending most nights with one or more of her men.

Yes, men. Plural. Four, to be exact. I’ve never been kissed, and my sister is in a committed relationship with four men. She’ll be moving in with all of them as soon as their house is finished.

Lacy has always been boy crazy, but it’s extreme, even for her.

“What will you be out doing while I’m working your shift?” she asks as she nabs a slice of bacon from Dad’s plate. When I don’t answer right away, mostly because my mouth is full, Lacy continues. “Who will you be seeing today?”

I glare at her as I answer. “Olivia.”

“Just Olivia?” Her eyes narrow. “Anyone else?”

“No,” I lie. My sister loves knowing everyone’s business on the island, but she doesn’t need to know mine.

I can just imagine how she’d love gossiping about how I’m spending my birthday with four men. She would never understand that my relationship with Cade, Ryder, Knox, and Logan Evans is nothing like her relationship with her men. Not even close.

I’ve been hanging out with the Evans brothers for nearly six months, but I haven’t told my parents about them either. My mom would jump to conclusions and think I was dating one of them, when, unfortunately, I’m not.

I was interested in Cade when I met him, but he has a girlfriend. All four of the men treat me like a sister anyway, and I don’t think my family would understand that I just enjoy spending time with them. They’re like the brothers I never had, and they’ve definitely been good for my golf game.

Lacy’s eyes are still searching mine, and I know she wants to push the issue. She’s been asking a lot of questions lately, but today she lets it drop, maybe because it’s my birthday.

Twenty-four and never been kissed. Happy freaking birthday to me.

One thing led to another

Cade and Ryder are at my door a few seconds after I turn off the engine, and Ryder pulls me into a hug as soon as I step out of my car. “Happy birthday, Bianca!”

The youngest of the brothers, he’s often affectionate with me in friendly ways: shoulder pats, quick hugs, side embraces, things like that. Today, though, he takes me by surprise with a full-on hug. Over his shoulder, I see Cade, and can’t help but wish that it was him hugging me, but he’s several feet away with no apparent intention of making physical contact.