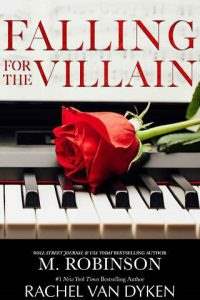 Those were the first four words he ever said to me. I used to loathe those words.

Until one day, I started counting down the hours until I played for him again. There once was a time when I despised everything about him. From his dark black, seedy, daunting eyes that used to petrify me anytime he walked into my room. To the sound of his voice that was both calm and eerie, smooth and dominant, thrilling yet terrifying. His tone was sharp, clipped, and it didn’t matter what he was spewing or demanding, whether it was hateful, punishing, or he was trying to please me; it was always precise and authoritative.

What I used to really hate the most about him, though, was how much he made me crave his touch, his torture. His presence was as consuming as the music I played for him.

It was all such a thin line.

I was raised in a world where I didn’t know the difference. It all blended together, good versus evil.

My fingers trembled against the ivory keys of the Steinway Alma Tadema piano. Over a hundred thousand dollars were under the tips of my fingers. The devastatingly handsome man behind me was powerful.

Wearing an expensive tuxedo, he looked so pleased with himself as he stared out toward his guests for the evening.

I was playing front and center in the open room, where all eyes were on me wearing a clingy white silk gown. Flawlessly, I shifted my fingers from one key to the next, playing the piano like my life depended on it.

I guess in a way it did because he depended on it.

Music was always an escape for me. The piano was just another extension of my soul, my heart, my body. I needed the sanctuary that only the vibration of the keys provided. Getting lost in the symmetry was the only way I survived this long.

I was his doll.

He could do with me as he wanted, and trust me—he did often.

My hair was pinned back with a few soft waves framing my face. You see, my villain loved beautiful things, and I was just another object he prided himself on owning. So he did with me as he pleased. My role in his life was to grant him peace through the fucked up things he did to me.

I soaked up every last bit of attention he ever gave me.

Every single smile in my direction.

“Play,” he said a second time, his hands coming down hard on my shoulders while I started playing “Reverie” by Debussy and Thibaudet.

People watched in rapture as my hands danced across the keys, and he stood proudly behind me as if I was just another piece of his collection, another prized possession.

All in a little game of catch with no release. I was now his property, a chess piece in a very dangerous game of cat and mouse.

With an end game that nobody could ever truly win.

He was incapable of love; he told me so the first day we met.

“I won’t love you. Ever.” His jaw clenched. “Make no mistake, though, your days as Juliet Sinacore are finished. But your days as my pet have only just begun.”

“So beautiful, Juliet, so fucking beautiful,” he rasped into my ear from behind me.

Beautiful but not broken.

I could take his brutality.

The fact that I belonged to him and always had.

I could take anything he ever gave me. Our relationship changed. It evolved. I was still very much his pet, and he was still my master in every sense of the word.

And a villain in love…

Was a very dangerous thing.

My eyes fluttered open, but all I could see was darkness.

I was in a blindfold. My hands were tied together behind my back, knocked unconscious on what felt like a solid chair. A slow throb started pulsing at my temples, reminding me I’d been hit on the head with something the minute I’d stepped on the beach. I was watching my nephew Naz for my brother and his wife while they were on their honeymoon.

Where was he? Did they take him too?

Panic quickly began to take hold, and the metallic taste of blood filled my mouth as I tried to lick against the tape that was pressed over my lips.

Caught off guard, I abruptly sat up, only to hear the keys of a piano go off.

Did they put me on a piano?

I could barely move.

I wondered briefly as pain slammed into my chest—was this how I was going to die? Sitting at a piano? My favorite thing to do in all the world.

My thoughts went back to the last conversation I had with my brother, Romeo. I’d been begging him to let me do my part in the family business for ages. He’d finally talked to my father, one of the main captains for the organized crime Sinacore family. All the ‘men’ decided I was too young, too inexperienced—too innocent.