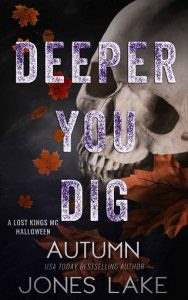 Trick-or-treat! It’s time for the grand opening of the new clubhouse…

Resident deviant Thomas “Ravage” Kane has been tasked with planning the Halloween party this year. Everyone will be there wearing their creepiest and most creative costumes. An unexpected treat leads to a brush with death that wasn’t in Ravage’s plans.

Catch up with your favorite couples and gain insight about some mysterious members of the Lost Kings Motorcycle Club in this Halloween-themed novella.

There are times and situations that require a hard dick. At the table during church isn’t one of them.

I never should’ve watched Trinity wriggle into a Halloween costume before leaving our house to go to the clubhouse. She didn’t tell me what exactly she was supposed to be. It didn’t matter—the outfit was sexy as fuck. The picture she sent me right before I took my seat didn’t free up any room behind my fly either.

“You with us?” he asks with an edge of annoyance only Rock can get away with.

“What?” I shift in my chair. Slowly, the war room comes into focus as I blink away the image of Trinity squeezing her ample curves into shiny, white leather.

“As I was saying.” Teller glares at me from his seat across the table.

Glare all you want, welterweight.

“I think the best location for this charity event would be Furious.”

“You want to shut down the gym for a day so a bunch of little snot-monsters can run around?” He can’t be serious.

Normally I’d say it’s better to collect favors than hand them out. Except when it comes to my brothers. Fuckers know I’ll do anything for the club.

Doesn’t mean I won’t enjoy being a dick about it.

“Why exactly am I going to turn half of Furious Fitness into a kiddie carnival?” I raise my eyebrows and stare Dex and Z—the two geniuses responsible for this idea—down.

“Dibs on the pumpkin carving station.” Jigsaw zigzags his hunting knife through the air to demonstrate his talents.

“Easy, Michael Myers,” Z says, holding out his hands like a lion tamer. “I don’t know if stabby utensils are the way to go on this event.”

Teller snort-chuckles into his fist. “Michael Myers my ass. More like Pennywise.” He leans over the table to lift his chin at Jigsaw. “What the fuck you wearing, bro?”

“Weird, since you are a clown,” Stash mutters.

Jigsaw flicks the ties of the frilly black shirt he’s wearing under his cut. “I’m thinking of attending this year’s festivities as a pirate.”

Z sits forward, resting his elbows on the table and pins Jigsaw with a stern look. “You thought church was a good place for your costume trial run?”

“Yeah.” Jigsaw grins at Z at one end of the table, then at Rock at the opposite end. “Why not?”

“I think he doesn’t want to admit this was a serious fashion choice.” Murphy squints at Jigsaw and pretends to give his outfit a closer inspection. “Did you steal that from an ol’ lady’s closet? I swear Heidi has a blouse that looks just like that.”

I snicker and reach across the table to bump my knuckles against Murphy’s.

“Z’s right,” Dex says, putting an end to us picking on Jigsaw. “We used to do a lot more charity events in Empire. It wouldn’t hurt to slap a fresh coat of paint on our ‘nothing but good guys who ride Harleys’ reputation. With all the shit going on with MCs in other areas, we should dust off our warm, fuzzy sides and show them off.”

“Thank you for volunteering, warm fuzzy.” I reach for a pen and piece of paper. “‘Dex—in charge of haunted house.’”

“No way,” Ravage protests. “John Wick over there might scare the kids away.”

Dex shoots him a glare, then turns toward me. “I’ll have my hands full with Crystal Ball on Halloween, brother. It’s one of our busiest nights.”

Fuck, he’s right. Dex has enough to do.

“Maybe Murphy should do it,” Z suggests.

“Fuck yeah, I’ll decorate the shit out of Furious.” Murphy sends me a big shit-eating grin, daring me to make fun of him.

Sometimes I miss the days when he feared me. “Just because we’re partners and you’re wearing that VP patch now doesn’t mean I won’t kick your ass.”

“Bring it on, big guy.” He motions to me with his fingers.

Just as I lean over the table to wrap my fingers around his throat, Rock stops me with a hand to my chest. “Simmer the fuck down.”

Bricks raises his hand. “I’ll do it.” He leans forward to get Teller’s attention. “Think Scribbles would be willing to help out?”