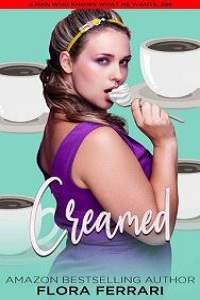 Looking up, I notice the time.

Mrs. Peters, the lady I work with, gives me a knowing look, creasing the corners of her withered mouth into a half-smile.

“I think I’ll go clean up out back…,” she says, her eyes twinkling with a hint of mischief.

I open my mouth to say something, to remind her not to tease me about it….

“Cream o’clock,” she calls it. Sometimes it’s just like today, and she’ll busy herself someplace else in the hospital coffee shop.

Giving me time alone to get his coffee ready.

I feel my chest flutter at the thought, wishing I could see him more than just once or twice a day.

But I remind myself it’s just my imagination – an old lady poking innocent fun.

I mean, it’s not as though Dr. De Silva, a mature professional, doctor no less, would have any real interest in a younger girl like me.

Or anyone else, for that matter.

A younger woman, I mean.

Then why do I feel like one whenever I see him?

Why do I feel my knees give way and my mouth go dry? My heart races and any reasonable thought is replaced with the image of him grabbing me and bending me over the nearest table.

Showing me just how the good doctor really operates….

“Mandy? Mandy?” Mrs. Peters says, laughing, waving a hand in front of my eyes, snapping me back to reality.

“Uh… Sure,” I blush. I'm trying not to let it show just how much it means to me to know he’s almost here.

The job itself is nothing special. There is minimum wage and no benefits, but I get free food and plenty of it.

Just as well, because after rent and utilities, I’m not exactly in a position to eat anything more than humble pie.

My hands always shake a little, and I watch them tremble more than usual once I start laying everything out to make his coffee.

Just how he likes it.

On my first day on the job, I was flying on adrenalin, and I got cocky, asking him the first time we met if I could interest him in any cream or sugar with his coffee.

It was an innocent question, but I think that’s what set the ball rolling with Mrs. Peters teasing me about Dr. De Silva and me.

His low growl of satisfaction resonates in my memory as strongly as it did when he said it.

I don’t remember much of what I said or did after that, but his words have kinda been humming in my mind and in my special place since.

I’ve been working here for just under a week, but it feels like a lifetime.

A lifetime without him all the time.

Still, even if I just get to spend a minute or two anywhere near Dr. De Silva each day, it makes everything else in between worth it.

Looking up from the counter top a second time, I feel my breath catch as his eyes meet mine once he walks in.

His huge, muscular V-shaped torso is visible through the dark blue surgical scrubs he has on.

His taut behind is usually covered when he wears his white coat, but today I already know I’ll get to watch his second-best asset when he leaves.

His biggest assets, though?

Dark, almost brooding brown eyes that soften once they bore into mine.

The way his face shifts, his chiseled jaw flexes, and his perfect teeth beam me an instant welcome.

All the seriousness of his day is gone once he sees me.

That’s what I tell myself anyway, don’t judge me.

A girl can dream.

His hair. Cut short with a grille of silver flecking on each side of his powerful, intelligent temples.

Perfect skin too, which matches everything else.

Ah! Who am I kidding? The guy’s got more assets than a stockbroker’s portfolio.

Seriously though? How can a man who works such long hours and has so much responsibility on his mind stay in such great shape?

I just have to serve food, and it’s like I gain half its calories.

The most I get to see of what’s under his scrubs is his neckline, sometimes the top of his chest that has a tuft of hair poking through.

It makes me sigh at its thought every time I imagine my fingers teasing it. All the way down that muscular chest to his abs.

Abs, I sense, are just as lean and hard as the rest of his sculpted body which he effortlessly moves with purpose.

Dr. Foxx De Silva is a man who knows what he wants, and if the most I’ll ever get to give him is my creamed coffee, so be it.

I can only crimp my lips and blush. I always get tongue-tied whenever he’s around now.

My one solid line the first day was the one about cream and sugar, and just that once.